No Country For Old Detectives 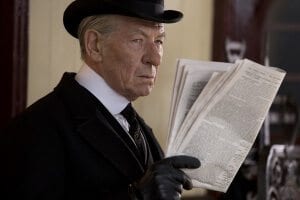 He’s an old man-93 years old, to be precise. While a great deal of his life was spent amidst the bustle of London, that’s all behind him, like most things. He lives in a rambling old cottage near the sea in Sussex, and spends his days beekeeping. He is the World’s Greatest Detective, and he’s slowly losing his mind.

Everybody knows Sherlock Holmes. The uncanny powers of deduction. The smartest guy in the room by a country mile. The character has been around since 1887, and has been portrayed 255 times on screen*. Even recently, we’ve seen snarkmeister extraordinaire Robert Downey Jr. play him twice in two fun but stupid films, and the perpetually haughty Benedict Cumberbatch play a compelling 21st century Holmes on the BBC.**

Now we have Mr. Holmes, starring Ian McKellan as the great detective. It’s based on the novel A Slight Trick Of The Mind by Mitch Cullin, and it reunites McKellan with director Bill Condon. For a while there, we mostly saw McKellan either playing the clever wizard Gandalf or the radical mutant Magneto. He also did some kids movies, and starred with Tom Hanks in the perpetually moronic The Da Vinci Code. He’s a great actor, which he proved in Gods And Monsters and Richard III. It just felt like, for a while there, he was slumming a bit.

Mr. Holmes is really more of a character piece than anything else. Sure, there’s a mystery, but it’s ultimately more a lesson in humility than a twisty whodunit. We’re reintroduced to Holmes in his extremely advanced years. He’s been retired for decades. Watson is dead. Mycroft is dead. It’s just Holmes with his prickly housekeeper Mrs. Munro (Laura Linney) and her curious son, Roger (Milo Parker). The one opponent he can’t out think is senility, so he has taken to homeopathic remedies like royal jelly, which is thought to slow mental decline. When the royal jelly stops working, Holmes embarks upon a trip to Japan in search of prickly ash, which he believes will help with his decline.

But beyond the obvious reasons, why is Holmes trying to strengthen his memories? He knows his time on earth is limited. He also goes to the movies and sees a fictionalized version of himself,*** with the deerstalker cap and the gigantic pipe. Between that and the numerous tales written by Watson, Holmes decides it’s time to set the record straight regarding his last case. The problem is, he can’t remember the details.

From there, the film skips between the growing friendship between Holmes and Roger, and the details of the last case, 30 years ago. McKellan is outstanding portraying the great detective in two different time periods. When we see Holmes on the case, there’s the familiar glint in his eyes. The intelligence, persistence and supreme arrogance all working together, and that’s the Holmes we’re used to, dammit. His 93 year old Holmes is heartbreaking. The same characteristics are there, but he’s trapped in a frail body and his massive intellect is slowly wasting away. I’m not used to seeing Sherlock Holmes afraid, but McKellan sells that brilliantly.

The supporting cast is also solid. Laura Linney doesn’t give bad performances, and her Mrs. Munro is simple, but not stupid. She’s widowed, overworked, underpaid, and dealing with a senile jackass. This motivates her to start looking for other work so that she and Roger are taken care of. Conversely, Roger loves helping Holmes with the bees and hearing his old stories of detection. The film sets up a cool little conflict. Mrs. Munro just sees Holmes as an invalid, whereas Roger idolizes him. Neither of them are entirely right or wrong, but the movie seems to take Roger’s side and penalize Mrs. Munro.

Their conflict is just part of a larger conflict between reality and fiction. Director Bill Condon and screenwriter Jeffrey Hatcher delight in these themes, and Holmes struggles between the public perception of him and the reality, along with the struggle between emotion and logic.

Fair warning, however. First, the mystery isn’t a massive conspiracy or a plot to take over the world. There are clues, reveals, and we see the puzzle fitting together logically. But the stakes are small, really, just personal things. Here, the case itself isn’t terribly interesting, it’s more about Holmes reaction to it.

Second, if you’re hoping for a titanic battle of wits, a cracking good fistfight, propulsive energy, or a high-speed chase, get ready for a frosty cold glass of disappointment. There is a chase, kind of, but it’s never faster than walking speed. Holmes also falls down a few times. That’s pretty much all the action you’re getting.

But perhaps the derring-do and pseudo-martial arts were just more of the embellishments that Holmes hated so much. Mr. Holmes is understated and intimate, and it examines one of the most famous fictional characters through an interesting new lens.

**But the idea of Holmes texting is weird to me. “WTF, Moriarty?!”

Tim Brennan
Tim has been alarmingly enthusiastic about movies ever since childhood. He grew up in Boulder and, foolishly, left Colorado to study Communications in Washington State. Making matters worse, he moved to Connecticut after meeting his too-good-for-him wife. Drawn by the Rockies and a mild climate, he triumphantly returned and settled down back in Boulder County. He's written numerous screenplays, loves hiking, and embarrassed himself in front of Samuel L. Jackson. True story.
See More Articles From Tim Brennan
Tagged: bill condonhiroyuki sanadaian mckellanlaura linneymilo parkermr holmes