Rattlesnake Season Quickly Approaching in Boulder – Here’s What you Need to Know!

Despite the chilly temps this week, it has been and will be pretty warm outside; snakes are back out in the fields and trails around Boulder. But never fear, Boulder County is home to only one venomous snake, the prairie rattlesnake.

There are a few kinds of nonvenomous snakes that reside here as well, but you will likely only get confused when you see a Bull snake. Bull snakes are quite common around Boulder and their large size and similar pattern to that of a prairie rattlesnake get people worried when they come across one on the trail. Here are some ways to tell them apart:

Both snakes have a brownish spot pattern, but the rattlesnake has light circles outlining his dark spots. The rattlesnake also usually appear more of a dusty brown color, and the bull snake has dark brown, blackish blotches. 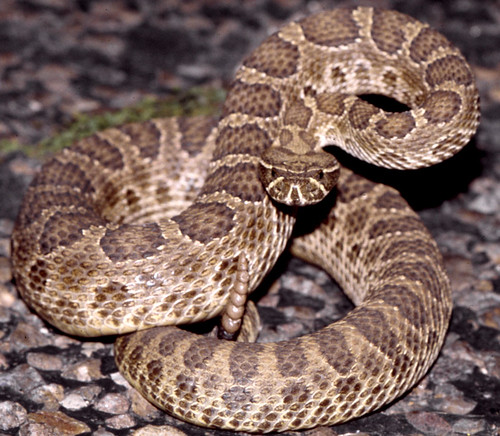 Bull snakes’s heads are the same size as their necks, while the prairie rattlesnake has a head much broader than the neck, in a somewhat triangle shape. This can be a little confusing because some prairie rattlesnakes have stopped rattling to warn those around it, which is suspected to be a result of people killing those rattlesnakes that give quick warnings. (Please do not kill wildlife when they are in their own home, open space land). The bull snake also acts like he is a rattlesnake when feeling threatened by coiling up, shaking his tail, and making a hissing noise. However with some observation you will be able to tell the difference between the poser and the real thing. Either way the snake should be avoided.

The best policy is to watch where you are walking, try to stay on trails (which protects other wildlife and prevents erosion), and leave wildlife alone. If you encounter one on a trail simply walk a few feet around it, giving it plenty of space so both you and the snake feel safe and un-threatened. Protect your dog as well by keeping him on trail where you can see what he is walking near.

Snakes are pretty cool creatures and you can enjoy a sunny warm day along with them, just be aware of your surroundings!