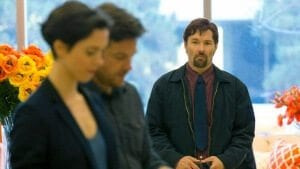 Joel Edgerton’s directorial debut, The Gift, isn’t just a Yuppies In Peril movie.* Not precisely. It’s got a number of the genre hallmarks. Conspicuous consumerism. A seemingly happy couple with secrets. A ridiculously cute pet that has caught the eye of a lunatic.

But The Gift is something special. Not only is it a tightly plotted and well directed film, but unlike many American films, it pulls no punches. It’s not afraid to get really, really dark. I’m talking Korean Revenge movie/Japanese Horror movie dark.

Robyn (Rebecca Hall) and Simon (Jason Bateman) are happy, or at least they seem to be. They’ve moved from Chicago out to sunny California. Simon has taken a corporate security job and is pulling in big bucks. Robyn has a freelance design business. Their new home is huge, beautiful, and has lots of gigantic windows. They’re trying to start a family. They really should be happy, given that they’re living the American Dream. But something nags at Robyn, and she feels vaguely unfulfilled.

But then Gordo (Joel Edgerton) enters their lives. While Robyn and Simon are out shopping, Gordo nervously approaches. Gordo and Simon went to high school together, and they’re shocked to see each other. So they do what most of us would do. They chat a little, exchange numbers and make vague plans to catch up, knowing that there’s an excellent chance those plans won’t happen.

But soon afterwards, a bottle of wine arrives on the porch. Then Gordo arrives unannounced, just to say hello. How does he know where they live? Nobody’s quite sure. Regardless, the couple honors the social contract and invites Gordo to dinner. It’s awkward. After it’s over, Simon asks Robyn, “Did he seem odd to you?” He’s odd, all right, but in a flat and squirrely way. Why is he there? What does he want? Why does he want to be friends, especially when Simon seems to barely remember him?

From there, things get worse. Much worse. I won’t say more about the plot, because a film like this works best with minimal knowledge. So this is the part where I get down on my knees**and beg you to go into this one cold. Don’t look up plot points online. Avoid social media. If a friend has seen it and tries to overshare, clap your hands over your ears and leap up and down chanting. Do what you need to do, and I promise, you’ll be rewarded with one of the most ruthless thrillers I’ve seen in a long time.

The Gift is Joel Edgerton’s baby all the way. He does triple duty directing, writing the script, and giving a sublimely creepy performance as Gordo. You might recognize Edgerton from Exodus: Gods And Kings, Warrior and as Owen Lars in the dismal Star Wars prequels. He’s an incredibly talented filmmaker, and he’s obviously done his homework. The film feels a lot like the Robin Williams Mad Photo Technician film One Hour Photo. There are only a few jump scares, but instead there’s a pervasive and quiet feeling of dread. Edgerton’s screenplay is smart and pitch black. He knows the rules of the thriller genre and, while he withholds information until near the end, he never goes for an M. Night Shyamalan style twist.

While we’re handing out praise, Rebecca Hall and Jason Bateman definitely earn their fair share. Hall’s Robyn is referred to as a “door always half open” sort of person. She’s smart, vulnerable and thoroughly decent. Robyn is intrigued by meeting someone from Simon’s past, which I suspect doesn’t happen very often. Early on we feel her doubt towards the situation***, but when she regains confidence, her transition feels natural and real. Bateman has built up a persona as a hilariously acidic type in comedies. Here, he takes that withering sarcasm and uses it as a weapon. His Simon truly loves Robyn and wants the best for her, but he’s also a dickish Alpha-male. He’s the kind of guy that’s usually condescending. He uses humor to belittle others, then can’t understand why people just can’t take a joke.

The Gift gives viewers a lot to mull over. It’s smart, insidious, and extremely nasty. Make an effort to catch this one in theaters, but don’t let some knucklehead spoil it for you on Twitter or Facebook. Let yourself get surprised.

*A sub-genre of thriller involving a young, affluent couple (usually white) being menaced by an interloper. Movies like Pacific Heights, Unlawful Entry, The Hand That Rocks The Cradle, you get the idea. Fatal Attraction is the ur-Yuppies In Peril movie. The genre is usually idiotic, but there’s something satisfying about a tranquil upper-class existence getting blasted all to hell.

***It wouldn’t kill Robyn to read The Gift Of Fear by Gavin de Becker.

Tim Brennan
Tim has been alarmingly enthusiastic about movies ever since childhood. He grew up in Boulder and, foolishly, left Colorado to study Communications in Washington State. Making matters worse, he moved to Connecticut after meeting his too-good-for-him wife. Drawn by the Rockies and a mild climate, he triumphantly returned and settled down back in Boulder County. He's written numerous screenplays, loves hiking, and embarrassed himself in front of Samuel L. Jackson. True story.
See More Articles From Tim Brennan
Tagged: jason batemanjoel edgertonrebecca hallthe gift
Boulder Colorado Air Quality