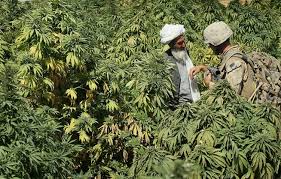 Photo Credit: Pharmaceuticals.wonderhowto.com
Now I realize in advance that this post may shake the tree of those firmly nested in their political views, but this is a topic that is gaining increasing attention and rightfully so. Having grown up for 24 years in one of the most heavily military influenced states in the US, I feel like I have a decent insight into the issues affecting not only soldiers, but also the places they call home.
Some of the best strains I have ever smoked supposedly came back from overseas smuggled as seeds in the pockets of Navy seals, though no one would ever admit to this. I grew up a few blocks from the biggest Navy seal base on the east coast – Fort Story. One legendary strain that circulated when I was a teen in Virginia Beach, the super-potent Lemon Skunk Afghani, very possibly came back with these super-warriors during the original 70’s Afghan conflict (you know, back when we were still friends with the Afghani’s). One thing that’s no secret anymore: veterans use marijuana, and in fact many of them are outspoken activists on the subject.
Military weed legends aside, the biggest acronym to hit the headlines in reference to our returning soldiers and modern medicine is PTSD or Post Traumatic Stress Disorder. Once known more simply as “shell-shock”, PSTD affects a vast portion of our military who have served in active combat zones. The utterly horrifying events of war that the general public is shielded from are daily realities for our soldiers. Without going into grotesque detail, our soldiers are subject to life changing events overseas that can haunt them until the end of their civilian lives.

To make matters worse, if you are at all up to speed with the nightmare that is the Veteran’s Affairs sanctioned Hospitals, then you know our soldiers do not receive an acceptable level of care for ongoing medical issues after their return from war. We make them a promise that we will take care of them if they serve this country, and then they return to month long waits for psychiatric care and even simple surgeries. The system is broken, and only someone with a political agenda would argue it is not. Opiates are shelled out like candy to soldiers with PTSD, as if these narcotics with high potential for abuse could be the malaise for a predominately psychiatric condition. 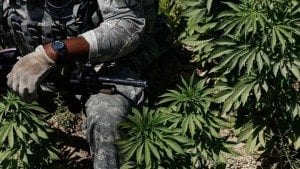 A soldier in a field of cannabis. Photo credit: Chris Hondros/ Getty Images

Here is the heart of my argument this round: replace this shortsighted prescription of opiates with marijuana to treat PTSD. In Colorado this is already happening, and we can watch the quality of our veterans lives improve drastically. The data from the VA office shows high rates of suicide and other crippling psychiatric disorders being intensified by the over prescription of opiates and antidepressants. Frequently these drugs being prescribed have high potential for abuse and myriad side effects that can make life worse for vets before they make things better. I’m not saying we should entirely ignore what western medicine can offer our veterans, obviously surgery and other methods are invaluable to their healing from war. But couldn’t we replace all of these severely mind-altering substances with a natural remedy that comes from the earth and can do the same thing? And not only for our veterans, but for everyone?

Again, I know my statements above beg the question: but is cannabis really for everyone? Well no, cannabis is not for everyone. However, the extracted cannabinoids do have value on their own for everyone, without the mind-altering aspects of high THC cannabis. The Cannabidiol (CBD) in cannabis has been shown to help fight depression and help patients suffering from PTSD cope with high anxiety and panic attacks. Additionally the Cannabinol (CBN) found in aged cannabis can also calm the restless veteran’s mind who cannot sleep through the night because of night terrors or insomnia. Companies like Mary’s Medicinals even make patches with these isolated cannabinoids in them that can be absorbed through the skin. So if smoking or eating cannabis is not your thing, then you still have options!

Though I have no medical degree, what I do have is years of personal experience serving and speaking with Veterans from Vietnam, Afghanistan and Iraq. Not only would prescribing marijuana save millions in prescriptions and doctors fees, it would be healthier for our veterans’ livers and minds. And from what they tell me, it seems cannabis is the malaise; the genuine cure-all for almost every psychiatric symptom from which our disabled veterans seek relief. 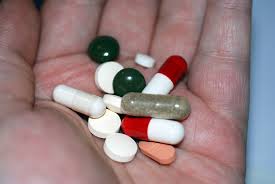 I have spoken with four tour veterans who show me a picture of a hand full of pills they took a year ago (mainly opiates, anti-depressants and anti-psychotics), which they have now replaced with a small pipe full of flowers or a reliably dosed edible high in THC and CBD. Nothing makes me happier than to be able to connect with soldiers who have made the most harrowing sacrifices for our country. It is their stories of healing from using cannabis that make me grateful not only for their service, but that I can be of service to them with medicine that truly works. My medicine’s downside is munchies and a good nights sleep, not a book length list of side effects that can disrupt the simple ability to function in daily reality. You tell me which is worse for the people who need it most.

For more information about Marijuana and our Veterans check out these sites/articles: 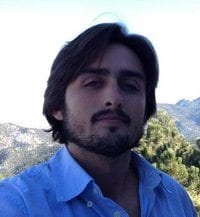