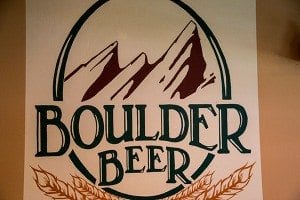 For this edition of The Faces of Boulder I headed down to the Boulder Beer Brewery to go on a free tour and check out Boulder‘s first Microbrewery. The tour was a great way to learn more about the history of Boulder Beer and how they make such a fine product. Boulder Beer offers the free tour every monday through saturday starting at 2pm and an additional one at 4pm on saturday so stop by and check out what they call “Boulders best tour” to see behind the scenes of how the hand-crafted brewing process works. 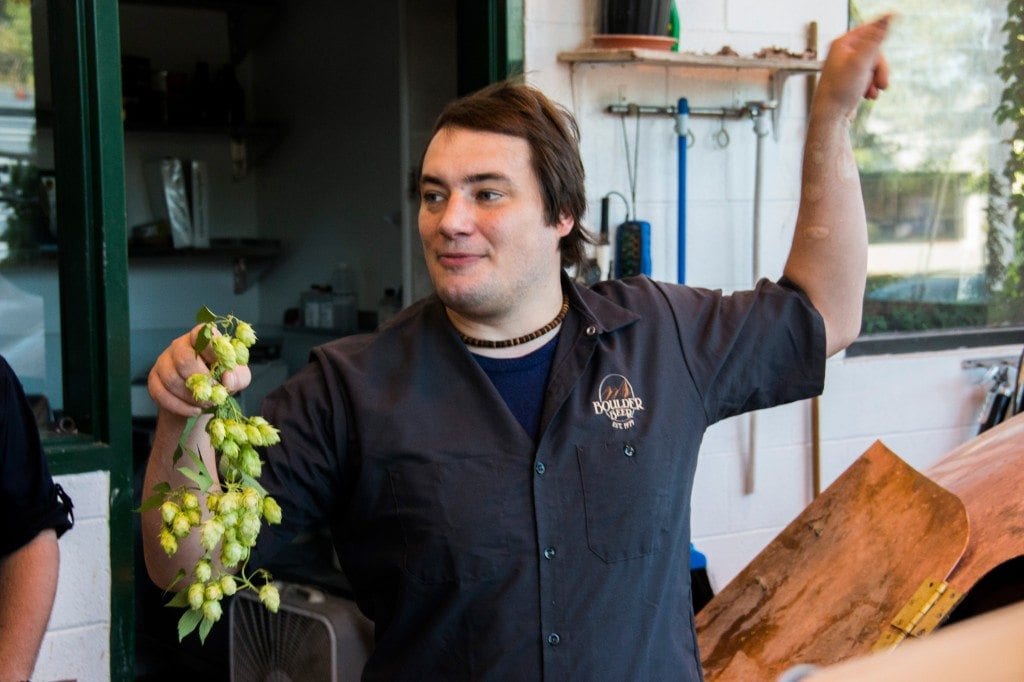 Chris stands here holding up hops while he explains the process behind creating their beer. Photo: Travis Bildahl

The tour starts off in a room with two giant vats where grains, yeast, and hops are combined and fermented to start the beer making process. Chris was there to take us through this process and show us how everything worked. He was delighted to answer any questions the group had about the processes and things like the difference between a lager and an ale. 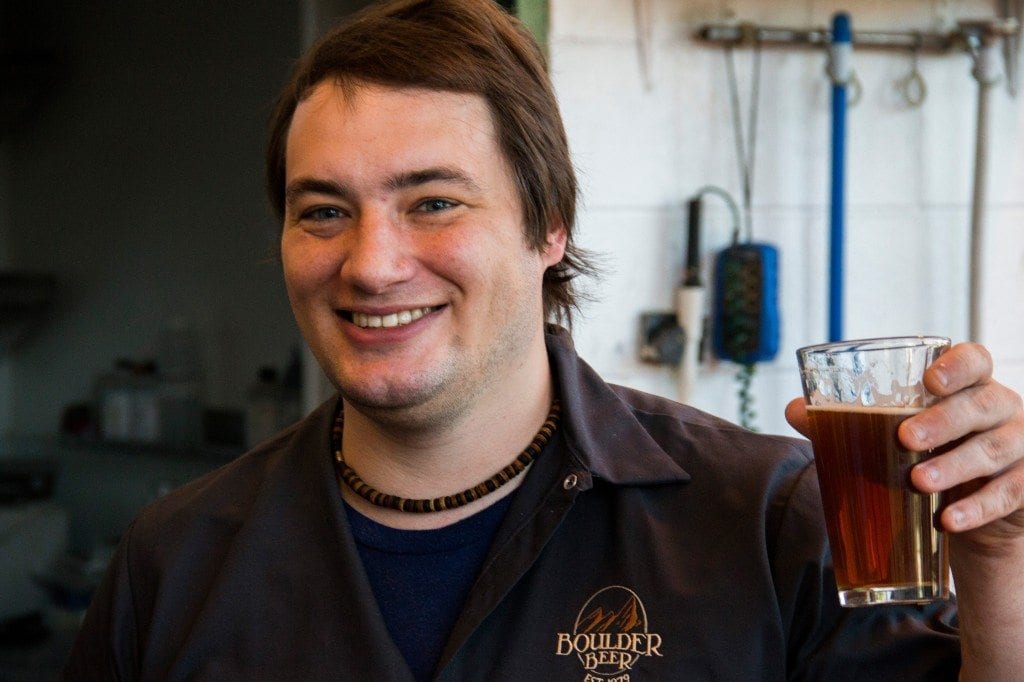 Chris enjoys one of his favorite Beers, Hazed and Infused which is Boulder Beer’s top seller. Photo: Travis Bildahl 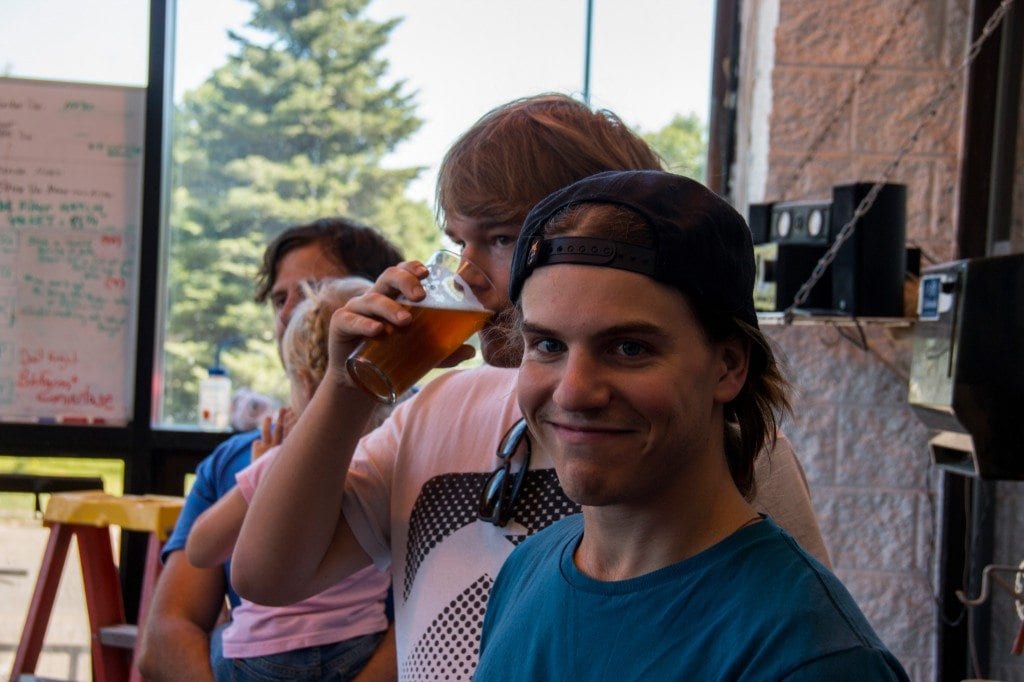 Smiles come about as people enjoy the tour. Grabbing a pint at the bar is encouraged to have a drink as you walk through the tour. Photo: Travis Bildahl 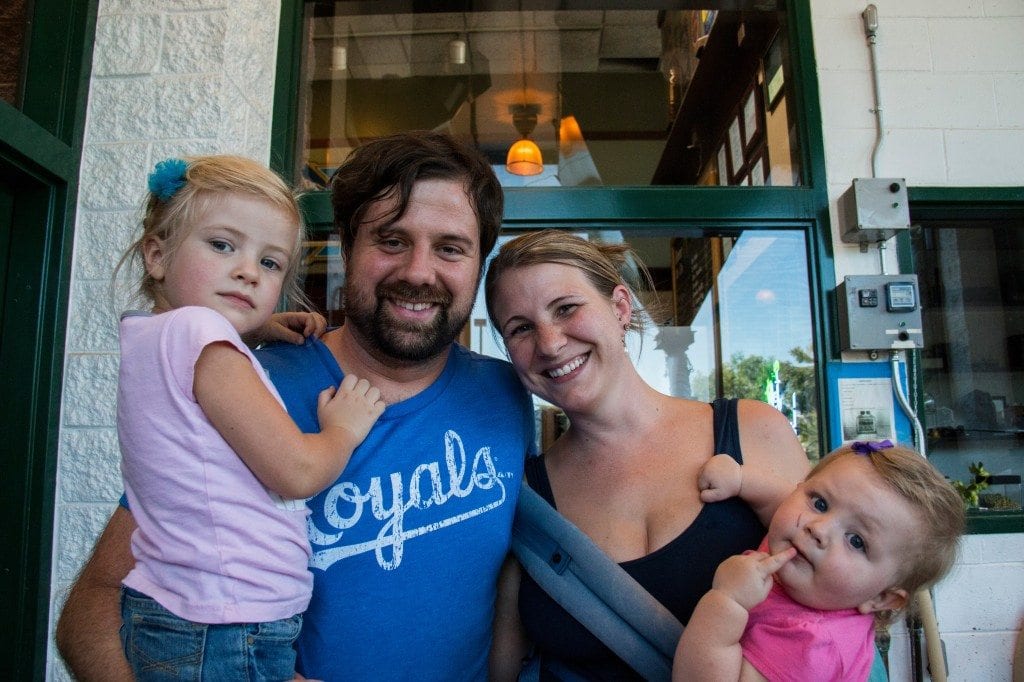 Families enjoy the tour with their kids. Photo: Travis Bildahl

After we learned all about the fermenting process and everything that goes into creating the flavors in the beer, our tour guide took us into the next room where all of the packaging is done for this microbrewery. This includes everything from bottling the beer to putting the beer into their distribution boxes. 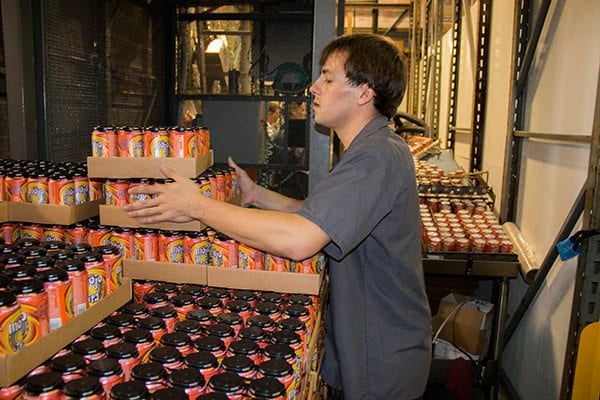 This employee grabs stacks of 24-packs from the conveyer belt and puts them in an organized pile to then get ready for distribution. Photo: Travis Bildahl 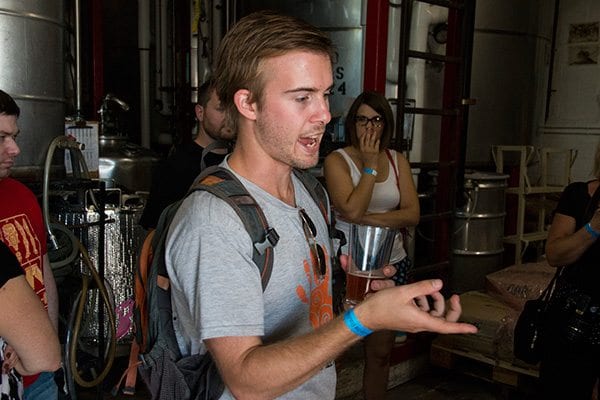 This man asks the tour guide a very important question. ” What causes the beer from a keg to get foamy and how can I prevent this problem?”. Photo: Travis Bildahl 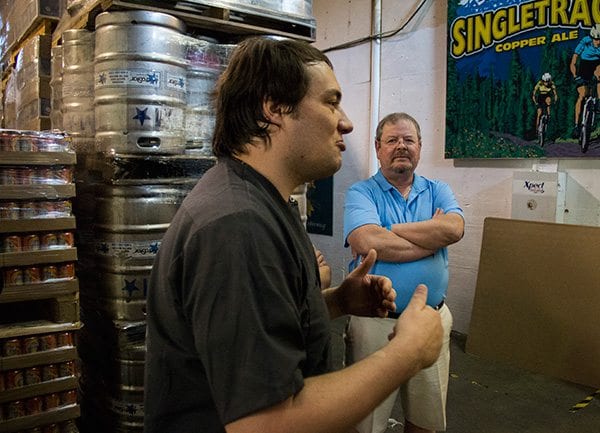 A person on the tour asks ” What causes the beer from a keg to get foamy and how can I prevent this problem?”. Chris responds to this question with a simple solution to preventing this from ever happening again. He explained that warm beer is what causes foam. When you tap a keg the beer is pumped from the bottom upwards which means that the beer on bottom needs to be the coldest. The problem that most people run into is that they only ice the top of the keg leaving the bottom where the beer is pumped from, warm. So next time you are having party and buy a keg make sure to ice the keg from the bottom keeping the beer cold and without foam. 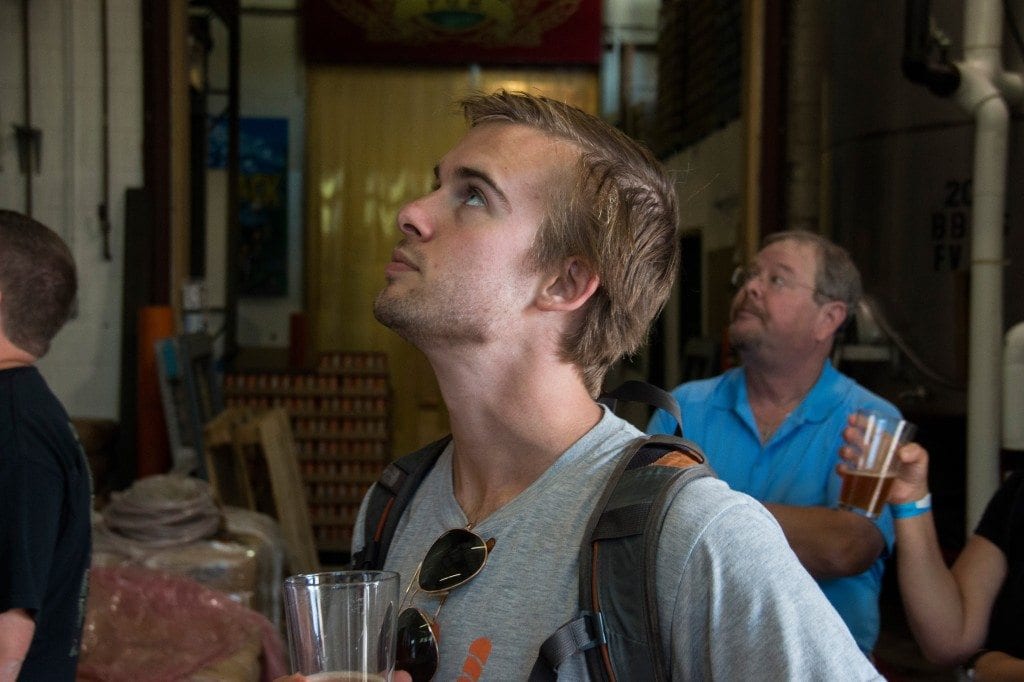 Looking at the vat that holds enough beer for one person to drink for life. Photo: Travis Bildahl 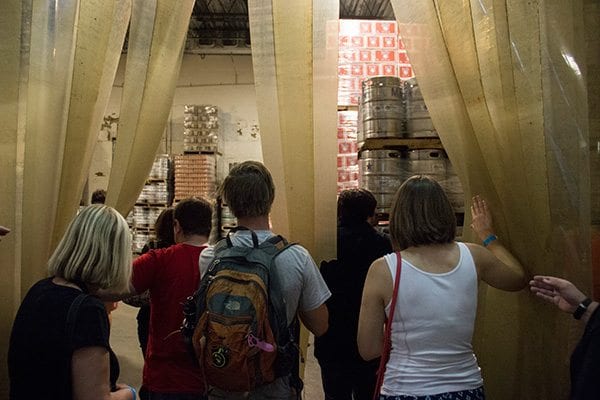 Chris leads us into the final room where all of the inventory of beer is kept. Photo: Travis Bildahl

The final room holds all of the boxes of beer that have been brewed and packaged. All the beer in this room has been pre-ordered by distributers such as liquor stores and bars. Boulder Beer makes all of the beer to order which means they are never making more beer than has been ordered. When someone requests an order of Boulder Beer they put the quantity into the computer which then lets them know to make the batch of that specific beer larger. They are only making the amount of beer that has been ordered ensuring the highest quality brew. 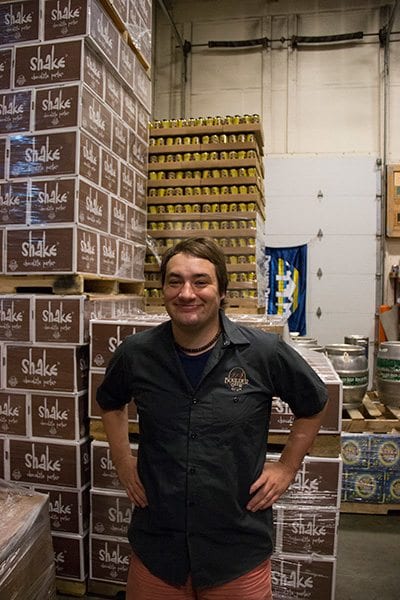 Chris stands here in the last room of the tour to tell us about the shipping process and where all of this beer is going. Photo: Travis Bildahl

The tour doesn’t end yet. After Chris explained the last part of the process he took us over to the tasting room to let us get a feel for how the different beers taste. And let me tell you they make a very delicious product! 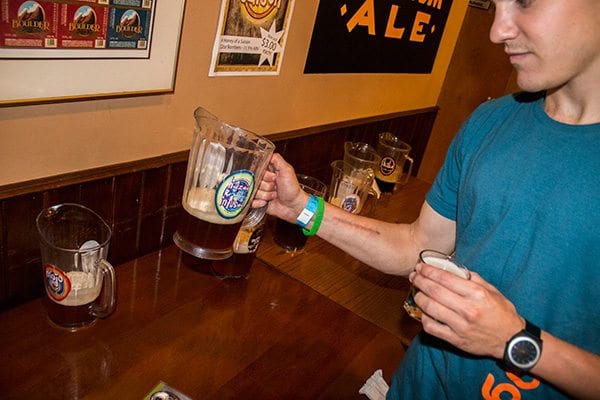 They offer a free pitcher of each type of beer to let the group sample all of the flavors that Boulder Beer has to offer. Photo: Travis Bildahl 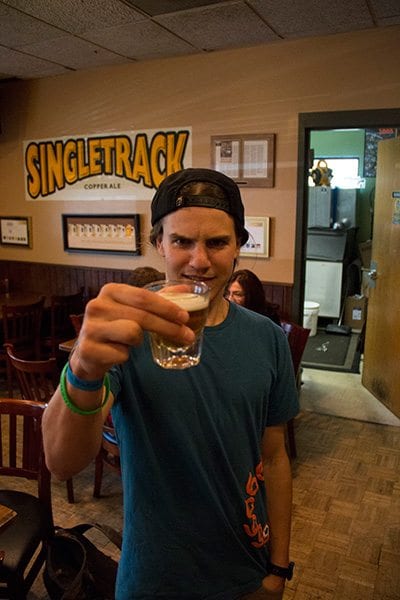 Nick Burkus enjoys a sample of Fryed which is a beer that is only available at the Boulder Beer Brewery itself. Photo: Travis Bildahl

After the tasting was over the Marketing Director of Boulder Beer took me out back of the brewery to show me the hops that grow right on the property itself. The area where the hops are growing is an outdoor patio where you can order food and drinks. The brewery puts on outdoor concerts every couple of weeks so come out and enjoy a beer and some food while you listen to music. Dan himself is going to play a show later this year with his band Chicken Dan Band. 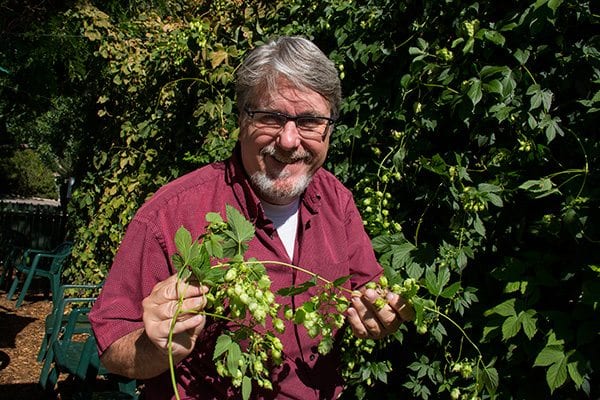 This is the Marketing Director Dan showing off the beautiful hop plants. Photo: Travis Bildahl

When the tour is all over you can stay longer at the Brewery to enjoy a pint of beer at the bar or get some food. Once you have a sample of Boulder Beer you are going to want a whole pint for yourself. I recommend taking this tour and getting to know how one of the top microbreweries makes their beer. Boulder Beer Brewery is not lying one bit when they say this is Boulder‘s best free tour!

I hope you liked seeing the Boulder Beer Brewery Tour and make sure to follow Faces of Boulder for more exciting posts.

Comment below to let us know how you would like to get involved with Faces of Boulder.

Is there someone you would like to see featured as the next Face of Boulder?