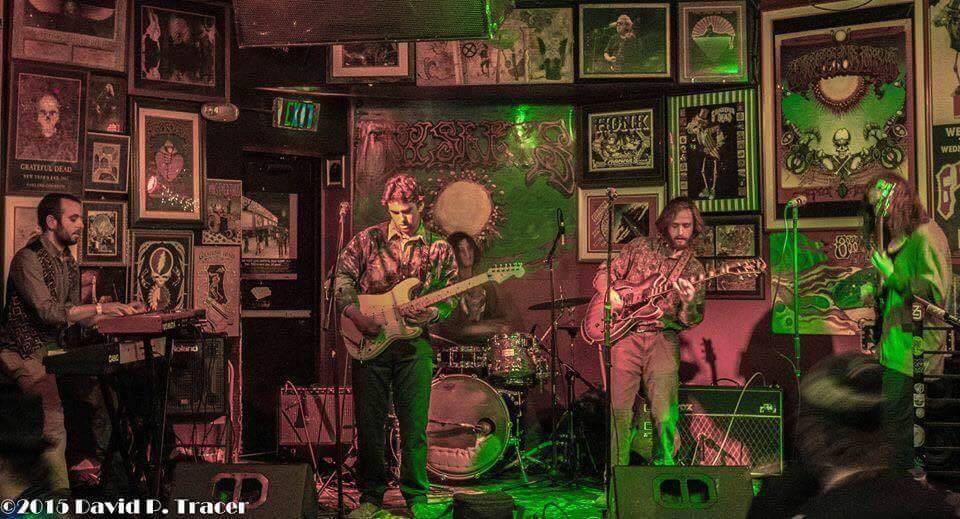 For AboutBoulder’s first featured musician profile, I went to see, and subsequently sat down and chatted with Boulder’s own Flash Mountain Flood!

The group is currently in residency at Owsley’s Golden Road on the Hill, a little dive absolutely covered in posters and paraphernalia in homage to the Grateful Dead, and other artists relevant to the psychedelic San Francisco scene of the 1960s (with a lovely little Bob Dylan corner, for good measure). Now that spring is upon us, they will be taking to the patio every Wednesday.

Owsley’s is owned and run by Jay Bianchi, who FMF credit as a major player and great influence on the local music scene of the Front Range. Rather than shelling out for huge, nationally-known acts, Bianchi concerns himself with fostering and preserving a certain culture, lifestyle, and emphasis on community through bolstering local acts, and taking them under his wing. However, that doesn’t mean there aren’t big names out there who are attracted to the same ideals. This week, Flash Mountain Flood played with Dave A’Bear, of Melvin Seals & JGB fame, who has also taken root here in Boulder.

While they don’t hesitate to identify as a jam band, these guys have a sound imbued with more history than one might guess on the surface. Their presence in a place like Owsley’s jells perfectly, but their sound has moments of Nashville Skyline here, and early Crosby, Stills, Nash & Young there. Case in point: their cover of JJ Cale’s “Cocaine”, reworked with a lengthy psychedelic jam in the middle. Another point of interest? These guys play purely analogue—what you hear is entirely the product of their talents and on-the-spot creativity. Furthermore, a big draw is that you won’t ever see them play the same show twice. The improvisation is visible and palpable, and it keeps things interesting and dynamic. Not even they know exactly where it’s going to go, which, they said, can induce some anxiety, that’s fortunately quelled by a comforting assurance. They think of one another as “five fingers on a guitar”, rather than separate players, so they have a sense that outside of their own moves, there are 4 other distinct possibilities, paths, and (if need be), friends to cover their slip.

FMF came into existence about 2 years ago, thanks in large part to inspiration from going to see Furthur, the modern outfit of Grateful Dead members Phil Lesh and Bob Weir. This, combined with tastes from Aretha Franklin to Pink Floyd, and a renewed investment in mastering their instruments, led to Flash Mountain Flood. They have existed in the current incarnation for 6 months, with a heavy prioritization of playing shows. They aren’t opposed to recording, but the true experience comes from seeing them play live.

Coming up this month, they are playing a show on April 20th at which the Merry Pranksters will be present. Also at the show, you can catch DeadPhish Orchestra, and Terrapin Flyer with Melvin Seals. Tickets are $20, and doors open at 3pm at Owsley’s. The guys will also be taking the stage with a number of other up-and-coming area musicians at the 4th annual Spread the Word Music Festival. The festival will be taking place the last weekend of the month at Owsley’s and Sancho’s in Boulder, and Quixote’s in Denver, all venues run by Bianchi. For more information and to buy tickets, click here.

And of course, you can “get flooded” with FMF every Wednesday during their residency at Owsley’s.