You may have already heard that sitting is the new smoking. Perhaps you’ve wondered what that means?  It simply means that the risk of dying younger and being less healthy that has long been attributed to smoking is now being applied to sitting on your 6 all day. Even if you are a world class exerciser, yet spend the majority of your waking hours sitting on your derriere, you are still at risk for chronic health issues associated with sitting.

Recently, several studies published in the American Journal of Preventive Medicine suggested that fidgeting may offset the effects of sitting all day. As a lifelong fidgeter, I’ve known for a long time that there had to be some benefit to being a fidgeter. My hypothesis was confirmed about 7 years ago when it was revealed that fidgeters burn, on average, about 8,000 more calories per year than those who sit still.  So, all you pencil twirling, leg swinging, finger tapping fidgeters have some evidence that this habit, 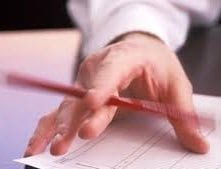 that likely drives somebody in your life crazy, might improve the length and/or quality of your life.

One of the lead authors of the study conducted at the University of Leeds, UK, pondered the implications of encouraging fidgeting. Often, people who aren’t fidgeters find it rude, annoying or indicating a lack of concentration when they encounter fidgeters.  There would need to be some major cultural changes occurring in work places to adjust that mindset.  As a fidgeter, let me say that I have a lot of energy and sitting in a chair is second only to lying down as a very low energy burner (.009 calories/minute for sitting). I use fidgeting as a means to burn off energy and, frankly, to keep my brain in motion. I think I was a shark in a previous life, because I function best when I’m in motion. Problem solving, critical thinking and creativity seem to be optimized when I’m in motion.

What if you’re not a fidgeter? Try these “you’ve heard ‘em before but may not have known why they’re important” tips for becoming more fidgety.

We can all use a little more fidget in our lives. So, when the opportunity arises, don’t just sit there, do something!

Andrea Groth
Andrea wants to live in a world where the neighborhoods are walkable, bike lanes are plentiful, and the food is fresh, delicious and readily available. A 20-year veteran of the health and wellness industry, she started her career in the fitness industry while earning a master’s degree in Exercise Science and Health Promotion, and then on to the burgeoning field of worksite wellness. Andrea has competed in collegiate level soccer, worked as a personal trainer, fitness instructor, wellness coach, and master trainer, climbed 14ers, and completed cycling centuries and metric centuries. All of these experiences give her the opportunity to view well-being from many different perspectives. When she’s not helping others to be their healthiest self, you can find her at a farm to table restaurant, down dogging at the yoga studio, or experiencing the Colorado landscape on a bicycle, snowshoes, cross country skis or on foot.
See More Articles From Andrea Groth
Tagged: