Sanitas, Sewn into Boulder fabric for the long haul 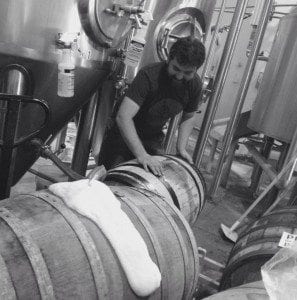 In most ways, Sanitas is similar to a tech start up: they are veterans from other companies in the industry, they knew exactly what they wanted to do, they are way ahead of schedule, they are focused on creating a community and being part of the existing one, they take what they are given by their surroundings and make it a positive situation, they give the customers exactly what they need, even if those customers don’t know it yet and the company always has a good story.

The founders, all homebrewers originally, Chris Coyne, Michael Memsic and Zach Nichols all worked at other breweries originally, Coyne and Memsic at Boulder Beer Co and Nichols at Gray’s Brewing in Wisconsin along his journey.

When discussing with Zach Nichols where they currently were along their path, he noted they were ahead of schedule. In fact, their third recently released can wasn’t even on their radar yet, but the customers were asking about it. As he put it, “The community was coming in and asking about an American IPA, so we made a couple, they were so popular that we took the best parts of them and made our third can release that way.” A big part of what they are doing is community outreach, bringing in great music, having yoga on Tuesday nights, Cheese and Beer Pairings with Cured the first Wednesday of the Month and having featured events like Scarpa Ski Bash where they gave away gear and had live music. Zach noted,”They love that they can provide others a good time.”
They are located next to the train tracks in the Boulder Junction area, did they mute the noise? No! They instead created a welcoming deal for customers, every time the train goes by, their “train beer” is discounted to $2.50 for the following 15 minutes.

The train beer was developed because they wanted something sessionable for their customers and for themselves. They are either creating something incredibly innovative, or sometimes leans on a classic style that can be appreciated by all. They were highly motivated to have sessionable beers on tap at all times, it allows customers to sit around and have one or two and get safely home. Most importantly, it allows them to feel comfortable having one or two and enjoy a conversation with a group or to meet someone new!

The beer you need to have-Jims English Bitter
I was talking with Zach and told him what I was drinking was delicious, he went on to tell me this, “That was founder Chris Coyne’s dad’s recipe that was given to him on the day of his father’s funeral by his father’s friend.”