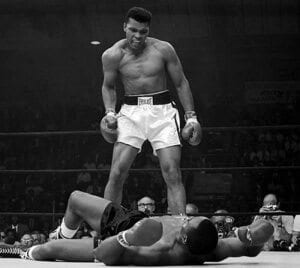 “Inside of a ring or out, ain’t nothing wrong with going down. It’s staying down that’s wrong.” –Ali

“It’s the lack of faith that makes people afraid of meeting challenges, and I believe in myself.” –Ali

“Champions aren’t made in gyms. Champions are made from something they have deep inside them – a desire, a dream, a vision. They have to have the skills, and the will. But the will must be stronger than the skill.” –Ali

“I hated every minute of training, but I said, ‘don’t quit. Suffer now and the live the rest of your life as a champion.’” – Ali

“To be a great champion, you must believe you are the best. If you’re not pretend you are.” Ali

“Only a man who knows what it is like to be defeated can reach down to the bottom of his soul and come up with the extra ounce of power it takes to win when the match is even.” –Ali

“If you even dream of beating me you’d better wake up and apologize.” Ali

“I’m not the greatest, I’m the double greatest. Not only do I knock ‘em out, I pick the round.” Ali

“I am the greatest. I said that even before I knew I was.” Ali

“It’s the repetition of affirmations that leads to belief. And once that belief becomes a deep conviction, things begin to happen.” Ali

“The fight is won or lost far away from witnesses—behind the lines, in the gym, and out there on the road, long before I dance under those lights.”

“I am the greatest. I said that even before I knew I was. I figured that if I said it enough, I would convince the world that I really was the greatest.”

“If my mind can conceive it, and my heart can believe it—then I can achieve it.”

“It’s not bragging if you can back it up.”

“I was indeed scared of Liston. I had to convince myself I was ‘The Greatest’ before I could convince the world…” Ali

“At home I am a nice guy: but I don’t want the world to know. Humble people, I’ve found, don’t get very far.” Ali