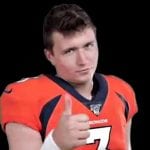 On February 7, 2016, confetti poured from above the bleachers as the Denver Broncos celebrated their last Super Bowl victory.  Peyton Manning walked away from the game a living legend, and John Elway cemented his legacy as both a championship quarterback, as well as a general manager. The following summer, long after the confetti was swept away, Denver gave John Elway a 5-year/$30 million extension while proclaiming, In John we trust.  And why not?  Elway was the architect that replaced Tim Tebow with Peyton Manning, dismissed coach John Fox after a 12-4 Super Bowl appearance season, designed... Read More