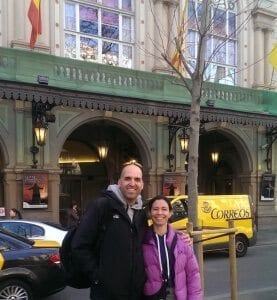 A special Boulder by way of Barcelona Faces of Boulder post today!

As I am in Barcelona opening a photo show, I was able to spend time with my friends Osi and Itzik who are spending a year (or more) in Barcelona. partly because of me..but that’s another story.

Osi and Itzik moved to Boulder from Israel with their two young children in 2003. Itzik was starting a new job and the opportunity was right. As you can imagine it was quite an adjustment. Osi remembers the first time they went to Safeway and were overwhelmed by the unfamiliar choices! When they arrived, she was nervous, but quickly saw the potential of living here. It was November, cold.. but, she said, “the snow was beautiful and quiet”. The beauty of Boulder helped her through the transition and after about a year and a half, she was used to living in the states and Boulder. They had two more children and eventually joined Bonei Shalom, where they found a great community and a place to experience their Jewishness with their children.

Now thirteen years later, The two older children in High School back in Israel, They, after listening to me endlessly spout how great Barcelona was (we moved to Boulder from there), thought it would be a good idea to check it out. So here they are. They miss their house, which of course they remodeled the year before they decided to go, and their neighbors and community, but are enjoying living in Europe and have been able to travel to see their kids and family a lot easier.

Their parting words are to send a big Hi! to their friends in Boulder and come to Barcelona. “We can explore it together”!