Meet Jeremy Mohney. Musician and composer. Jeremy is big part of the Boulder Swing scene. Although he plays other instruments, you’ll see him most comfortable as a sax player His young musical memories are listening to Big Band music with his grandfather and falling asleep to the sounds of Glenn Miller, Louis Armstrong and Slam Stewart. Jeremy plays music almost every night with his own bands and others. You can see him at the No Name bar, Waterloo, Kakes Dance Studio and at License #1 when he sits in with Banshee Tree. He likes the fact that there is a small underground swing scene in... Read More

I walked into Absolute Vinyl in East Boulder to scope out what was new. Basil was working behind the counter and we started talking.. Basil grew up here in Boulder but ended up living in Miami for a bunch of years working at Spec’s Music. He moved back to Boulder in 1989 after coming for vacation. He says “I’m not sure why I stayed, but here I am” I liked Basil. An iconoclast to the core, he wonders what Boulder would be like without the University. He thinks the town would be more interesting. When he moved back from Miami, he wanted to get back in the music business,... Read More

I met Mike outside Boulder Bikesmith as he was trying to fit his mountain bike into his SUV. A common site in Boulder! Originally from New Mexico, Mike and his wife moved here from San Diego in 1997. “We came out for a job opportunity, went up Flagstaff, took a look over the the front range and that was all she wrote. We never went to the beach in San Diego, we were always more oriented towards the mountains, so this was a perfect fit.”  He was a runner, qualifying for the Boston Marathon. Mike didn’t run it because he got more interested in trail running. Another reason to... Read More

Walking along Pearl, I stopped to speak with Kale, an acupuncture student who was giving away free 5 minute sessions as part of his training. I had to stop and get his story. Kale  was from Englewood originally, but for the last twenty years he travelled around the states and was in the Dominican Republic for 8 months doing bodywork at a resort. He’s been back in Boulder for 2 years. He was working as a massage therapist for seven years and having acupuncture done as a patient for 12 years. Being worked on as an acupuncture client, he bacame  interested in helping people through the illness... Read More

I’m sitting with George  on a blizzardy day in Boulder. George is the Digital Content Manager at KGNU. That means he posts news on the blog, he describes himself as the digital jack of all trades, from web development, online content and social media guru. He volunteered for 15 years before becoming a paid staff member for last 1 1/2 years. In addition to the digital content, he also produces and engineers the Kabaret live broadcast interview show and DJ’s Musica Mundi, a show of international music. George has been in Boulder since the fall of 1997 when he moved from Tucson to... Read More

Today is a special young Face of Boulder. I am sitting with Talia who is in 5th grade at Flatirons elementary. Next year she is excited to be starting middle school at Manhattan middle school of Arts and Sciences. Talia says she going to take band next year. She plays the trumpet. In 7th grade, she’ll do drama and band. Talia moved here when she was in 1st grade. She says she remembers a lot of bikes riding around. She remembers her first day of school being a lot fun. The teachers were nice and I made a lot of friends. Now that Talia has been here for 5 years, she likes that she can walk... Read More

I’m with Neil, who is the co owner of Tangles Salon in North Boulder. Her and her business partner opened Tangles in 2009 after  working at another salon for 24 years. Neil has been in Boulder since 1977 from Madison, WI where she attended beauty school and started working. She came to Boulder to escape Wisconsin. She’d been in Colorado and didn’t like Colorado Springs. Boulder seemed closer in spirit to Madison, but with better weather. Neil came to Boulder one January on vacation and people were wearing shorts. That sealed the deal. Neil met her husband in Boulder on a blind... Read More 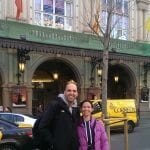 A special Boulder by way of Barcelona Faces of Boulder post today! As I am in Barcelona opening a photo show, I was able to spend time with my friends Osi and Itzik who are spending a year (or more) in Barcelona. partly because of me..but that’s another story. Osi and Itzik moved to Boulder from Israel with their two young children in 2003. Itzik was starting a new job and the opportunity was right. As you can imagine it was quite an adjustment. Osi remembers the first time they went to Safeway and were overwhelmed by the unfamiliar choices! When they arrived, she was nervous, but quickly... Read More

I met John while he was watching his nephew at a middle school wrestling match. He looked like a former wrestler, so I picked his brain about techniques,  and voila! Pic of the Day interview. John moved here from Arizona about a 1 1/2 years ago. He walked into his bosses office and said, “I’m outta here, I’m moving to Colorado!” His boss was supportive and asked him if he would work remotely. John agreed and came to Colorado, not sure where he was going to end up. He lived in Englewood, Denver, and NorthGlen, but kept finding himself in Boulder, going to see CU... Read More 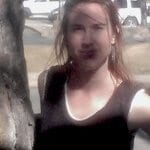 I spoke with Carrie about what brought her to Boulder and what she is doing in her life. Carrie was studying at a liberal arts college in Kentucky, where she discovered Buddhism. After college, she moved to the Shambhala Mountain Center where she was able to delve deeper into Buddhism and her spirituality, living there on and off for the next 9 years. In between her stays, she traveled to Nova Scotia, Mexico and India. In 2009, She moved to Boulder to raise her son. In 2012, Carrie started working as a massage therapist. She also has started a herbal salve business with a clever name, apathtocarrie,... Read More

I had the most interesting discussion with today’s faces of boulder participant, Kelsey Staub. An artist, Kelsey is studying art therapy at Naropa. Although she isn’t ready to settle down in a career as an art therapist, she appreciates the way the program teaches her to see art differently and how it affects and helps people. Born in Fayetteville, NC and growing up Des Moine, IA she was immediately taken by the beauty and creative culture of Boulder. I met Kelsey because her art was hanging at OZO on Pearl in January. It was so intriguing and different that I wanted to meet the artist.... Read More

Because books are good, I walked into Red Letter Books on Pearl and met Seth, the owner.  A CU grad and a Colorado native (right?!), from Loveland, he has lived in Boulder this time around since 1995. Seth is a second generation bookseller, his father owned a bookstore in Fort Collins. Seth took over from the original owner  of Red Letter a few years ago. He owned his own shop before then, but jumped at the chance to own a 25 year established store. It was great to speak to someone who has  been here and has experienced the changes in Boulder over the last 17 years. As you can imagine, there... Read More

Faces of Boulder – Pic of the day!

Enjoying Boulders balmy winter? So am I and so is Nicholas, who was playing his accordion on the Pearl Street Mall when I walked by. Not seeing too many accordion players around lately, I stopped and asked him a few questions. Nicholas is from Gainesville, Florida and this is his second trip to Boulder. He was here for four months last winter and liked Boulder so much, he came back this winter for a yoga workshop. When asked what his attraction to the area was, he replied almost reverently, “the Flatirons, the mountains, the elevation. It’s so different from the flatness of Florida”. Nicholas... Read More

I wandered into the KGNU studios in Boulder and met Alicia who is the new Co-Music Director at Boulders listener supported radio station. From the small town of Silt, the Colorado native attended Mesa College and has worked in community radio except for a short stint in conservation. She just moved to the Front Range from Grand Junction and is excited to be here. Alicia said, “It’s great to be here. I used to drive from Grand Junction to see music in Boulder and Denver so the shorter commute to shows is great!” Although she has travelled, Colorado is where her family and her... Read More

Rob Levy moved with his wife and two young children to Boulder just over four years ago from New York.  Like so many transplants, he was drawn to Boulder’s nature and easy living. He says that they wanted to shift their lifestyle from concrete to grass. From skyscrapers to mountains. Coming to Boulder gave Rob the freedom to expand. He says, “There’s something very beautiful about a restart in life. In NY, I was involved in coaching and I owned a high end woodworking company. The outdoor activities were few and far between. I felt like life was passing me by.” Fast forward and his days... Read More