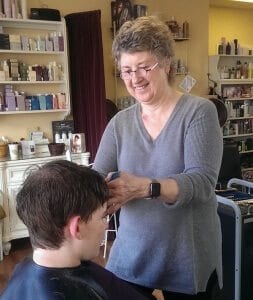 I’m with Neil, who is the co owner of Tangles Salon in North Boulder. Her and her business partner opened Tangles in 2009 after  working at another salon for 24 years.

Neil has been in Boulder since 1977 from Madison, WI where she attended beauty school and started working. She came to Boulder to escape Wisconsin. She’d been in Colorado and didn’t like Colorado Springs. Boulder seemed closer in spirit to Madison, but with better weather. Neil came to Boulder one January on vacation and people were wearing shorts. That sealed the deal.

Neil met her husband in Boulder on a blind date. He was the Boulder high school baseball coach for 10 years.

I asked about the changes over the years and her quick response was “traffic”. Although she doesn’t drive far. She also bemoans the loss of local businesses on Pearl and the taller buildings. One positive aspect of Boulder is the bike lane expansion.

Neil is a master gardener and while she hasn’t kept up the designation, she enjoys growing perennials. unfortunately, her garden has been taken over by grape hyacinths. ugh!