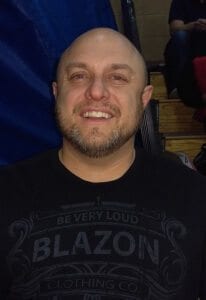 I met John while he was watching his nephew at a middle school wrestling match. He looked like a former wrestler, so I picked his brain about techniques,  and voila! Pic of the Day interview.

John moved here from Arizona about a 1 1/2 years ago. He walked into his bosses office and said, “I’m outta here, I’m moving to Colorado!” His boss was supportive and asked him if he would work remotely. John agreed and came to Colorado, not sure where he was going to end up. He lived in Englewood, Denver, and NorthGlen, but kept finding himself in Boulder, going to see CU football games, hiking Sanitas and going to meetups.

So, he cut his commute and moved to Boulder, where he is constantly looking for new trails to hike (his current favorite is the backside of Sanitas, a good 4 hour hike) and he just discovered Valmont Bike Park, where he will spend more time this summer.

When he’s not taking advantage of the outdoors, John is a lead developer for Goozmo, has a clothing company called blazon clothing and loves ECM. He is planning to go to EDC in Vegas this year.

Fun fact..John used to run a radio station out of his house in Arizona.

Thanks John, for not sitting still!