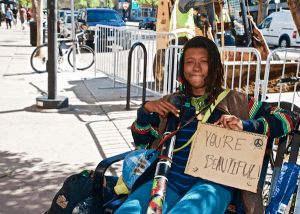 ‘The didgeridoo is an extension of my soul, so I suffered when I lost it.”

Nyah has a spiritual connection with the beautiful sounding wind instrument, the didgeridoo. Nyah first saw one when she was in elementary school, and was immediately drawn to the sound it made. She didn’t see one again until she was visiting San Francisco and saw one that was beautifully made with mushrooms carved on to look like they were wildly flowing from the base. When Nyah was at Mt. Shasta another time for Shasta Solstice, there was a gathering of people and she came across a man with a didgeridoo beat boxing into it. She realized this is how the sound could be generated so expressively and ended up playing it herself constantly over the next three days. The man with the didgeridoo ended up giving his to her. With the passing of time, the didgeridoo was lost.

Nyah arrived in Denver seven months ago. During this time she missed her didgeridoo. By chance, with the help of her friend, she came across another didgeridoo and began playing again. During that time she was fighting a chest cold and as she played the didgeridoo, it began to open up her lungs and bring her joy again.

Nyah has tried other instruments such as the pan flute, but she likes the sound of the didgeridoo better. 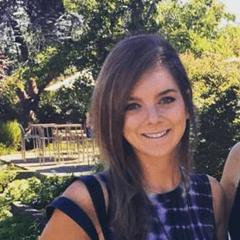