Home › Blog › Climbing and Humanity › Freedom in One Direction

Freedom in One Direction

I fell into climbing almost serendipitously – the last time that I returned to Hawaii, a friend of mine with whom I was reconnecting after many years had, since my previous move, become completely enamored with the sport of bouldering. I was perplexed, totally, finding myself in the camp of outsiders who, without insight, might only be able to view rock climbing in any form as simply a recreational amusement for thrill seekers, strength jockeys, extremists. Presumptive as that may be, he never did and still doesn’t fit this profile, and so with my curiosity piqued I accepted his invitation to take a tour of what had become one of the innermost sanctums of his life, in an effort to discover and perhaps even understand what it was that had so captured him.

The first bouldering gym that I ever entered was a strange place, in all ways inside and out just a standard fitness facility, but with a few rock walls tucked away into the corner of a weight training floor. Bouldering as an outdoor endeavor is only recently being heavily developed in Hawaii, and what with the humidity and the stereotypically laid-back, easy-going lifestyle that so many imagine in the islands, it’s not really the first place you would assume would become an epicenter of the sport. But stepping for the first time from the pebbled tile onto the in-laid padding of the climbing floor was like entering a sacred place, a temple shared amongst a group of zealots isolated entirely from any external influence or understanding.

Even between climbers, bouldering is seen as the discipline that most utilizes raw power, short bursts of controlled energy interwoven into brief, precise sequences. And from the outside, the brutal muscularity of heaving bodyweight by fingertips across seemingly impossible angles of stone is imagery even more imposing. But I was soon to learn that there is a secret body language spoken silently, the nuances and subtleties and delicate accents of which one may spend lifetimes trying to master, the native tongue of no man. 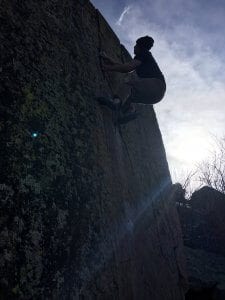 I was drawn immediately to the ascent, the aesthetic pleasure of a body in motion defying gravity through apparently simple yet incredibly complex mechanics. Climbing is graceful, must be graceful, reversing the course of that which keeps us planted firmly on the ground and creating instead a space along the wall that surges towards the sky like a river’s current, strong and constant yet not rushing, moving at an exact rate, no faster or slower than needed and so sure of its own direction and magnitude. We learn to take part in this, and to not fight but to flow.

This interfacing in its purest form is one of tranquility, calm, moving meditation. The precise and perfect harmony of all parts in a machine working together. I have spent much of my own life anxious, childishly cursing the moon and its tides beyond my control, often frustrated by my inability to force into order chaos and circumstance or to synthesize comfort where the world offered none. To scale rock is to communicate with elements that predate our own genetics and to turn a reverence of the natural world into communal devotion, the way alchemists sought gold. To tame entropy rather than succumb to it.

I know a woman who, in the hushed tones of prayer to something ancient and ancestral, has likened her climbing shoes to the instruments of pointe, has admitted that while wearing them she feels like a ballerina. That she climbs to create something beautiful, to take part in something beautiful. I watch her ascend, and I feel in those moments that I truly may understand what I once thought to be the trap of this sport, what I now know to be its escape. That we climb to feel free. 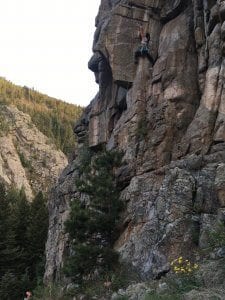 Andrew Lenec
Andrew Tristan Lenec grew up at the foot of one of the East Coast’s most popular climbing destinations, and has still never touched any rock there. He enrolled at the New School University in Manhattan to study Creative Writing before leaving the city and moving to Hawaii, where he eventually received a degree in Music and was discovered by climbing. After spending time in Australia and the Pacific, Andrew moved to Boulder to pursue the sport and in a futile attempt to sate his wanderlust. He is currently an Instructor at ABC Kids Climbing and, when not working with children, can usually be found in one of the city’s many parks with his nose as far in a Kindle as one’s nose can be, because actual printed books are unfortunately too heavy and cumbersome to travel around with constantly.
See More Articles From Andrew Lenec
Tagged: About BoulderBoulder communityclimbingoutdoorsrock climbing
Boulder Colorado Air Quality