Home › Boulder Start-ups › Your Network Is Your Net Worth

Your Network Is Your Net Worth 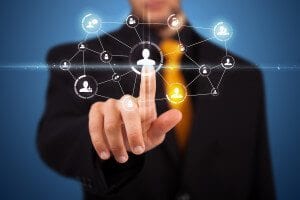 “When I was a kid, there was no collaboration; it’s you with a camera bossing your friends around. But as an adult, filmmaking is all about appreciating the talents of the people you surround yourself with and knowing you could never have made any of these films by yourself.” – Steven Spielberg.

For this week’s blog, I want to take a step back from the general scope of the Boulder Startup Boom and write about an extremely influential part in becoming a successful entrepreneur – networking. While the quote above pertains to the film industry, we must not look past what Spielberg is trying to highlight. He’s stressing the importance of collaboration and networking in the pursuit of any venture. Since we discussed the importance of collaboration a few weeks ago, I will focus this blog on networking.

One thing you learn early on as an entrepreneur is that in order to be the part, you have to act the part; and in order to act the part you have to think it, first. No, this doesn’t mean fake it until you make it (although sometimes thats exactly what you have to do). What this thought process entails is waking up every morning and knowing exactly who you want to be, where you want to be in 1, 5 or ten years, and doing everything in your power to capitalize on your goals and overcome the bars you set for yourself.

So how does this relate to networking? I found the answer to this question while attending a Liftoff seminar at Spark Boulder in mid October. The seminar, 5 Lessons From Bootstrapping a Multi-Million Dollar Business in Three Years, was based on the successes and insights of Andy Drish, co-founder of the Foundation.

Andy stressed that one of the first steps to making it as a successful entrepreneur, no matter what industry you find yourself operating in, begins with surrounding yourself with like minded individuals and knowing when to end a relationship, if necessary. These words can come off as bittersweet, but let’s face it, no one likes a coat-tail rider, and no one should allow themselves to be bogged down by someone who is not on the same ‘inventive plane’ as themselves, so to speak.

I constantly hear others around me complaining about the lack of success in their lives, and I myself used to be one of those people, as I am sure we all have been at one point or another. We get caught up in the day to day motions of life and forget to think about why we are not getting anywhere. While it is possible to attribute this lack of accomplishment to a multitude of personal circumstances, I believe as Andy highlighted, that the root of the problem lie within the very people that you choose to surround yourself with. For the sake of argument, we’ll call this your ‘network’.

I formulated a story in order to highlight the point I’m trying to make, lets take a look:

Your mother always told you never to hang with Johnny, the boy that lives down the street (I have nothing against people named Johnny, just seemed like a good name for the given example). As a child, you never understood why your mother did not want you hanging around Johnny, you just knew she was strongly opposed to the relationship. As you grew older, you began to see yourself naturally growing apart from Johnny, although at this point, you didn’t do anything about it. You hashed the distance to “people are different and that’s just the way it is.” However, as you get to the age where you finally want those around you to start taking you seriously, you realize why your mother didn’t want you hanging around Johnny. Johnny has no motivation, no drive and no plan for his future. While your out taking positive strides towards your future, Johnny is still wondering if there is a way to ‘make it rich quick.’ Point is, you and Johnny just are not on the same wave-length anymore, and the only one feeling the affects, is you. Problem is, if you don’t make this connection soon enough, you could be traveling on the same bandwagon, down the same road to nowhere, with Johnny at your side.

I wrote this short narrative to make a simple point. While some may think we do not have that (Johnny) person in our lives, in reality, most of us do. At some point, it’s time to cut the low bearing fruit from the tree, and lately, Johnny has not produced a single grape.

I don’t want to push anyone to start reconsidering their entire friendship circles and cutting off those who have not ‘produced fruit’ lately. What I’m trying to get at is that success starts with a positive surrounding. You can’t expect to succeed if you surround yourself with people who seem to be moving backwards. In order to implement positive growth in your life, you need to surround yourself with individuals with the same goals, aspirations, motivation, drive and tenacity.

I began this blog referring to the importance of implementing LinkedIn when it comes to networking, and as stated before, this a wonderful start. LinkedIn allows you to connect with business professionals, influencers, potential employers, potential employees and of course, friends and family. Furthermore, LinkedIn allows you to showcase your accomplishments and display your abilities to those interested. LinkedIn has endless uses and perks, and if the LinkedIn website were the topic of this blog, I might just spend some more time highlighting its assets. However, I believe networking starts at a much more personable and organic level.

If you want to build your network, grow as an entrepreneur and see success in your life, then you need to accept full accountability for the people you choose to surround yourself with. Stop making excuses when things don’t go your way. Remember that business is fickle, and you cannot expect to make the right decisions on the first go around. You can however, make the right decisions about who you spend your time with. Personally, I’ve grown more as an entrepreneur in ONE HOUR when surrounding myself with other like-minded individuals than I have during my WHOLE LIFETIME surrounding myself with people like Johnny. Believe me, I’ve had a Johnny or two in my life, and all I have to say is – forget about Johnny. That boy…is a ‘dumb’.

I hope you enjoyed this week’s blog on networking for the Boulder Startup Boom.  Thanks for reading and don’t forget, ‘your network is your net worth’! As always, like, share or comment as you see fit and do not forget to check back in next week on the About Boulder website at 3PM MST to see whats going on in the Boulder Startup Boom!