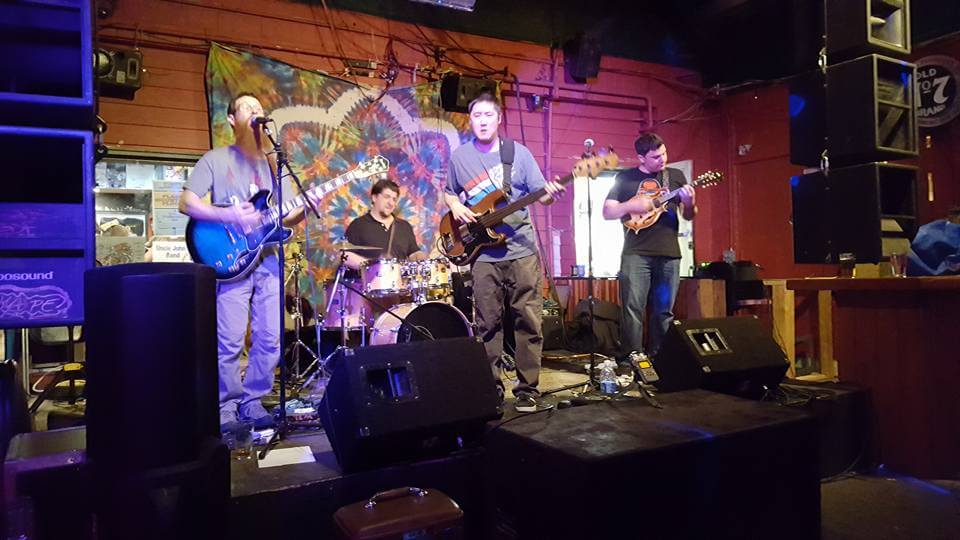 This week, I sat down with Michael Whalen, guitarist and vocalist for Denver-based funk/jam band Wonderlic, to talk about their new album, what it’s like to be a band in this area of the country, and how surprisingly similar jazz and jam bands really are.

To backtrack a bit, Wonderlic features Allen Galton on electric mandolin and vocals, Michael Whalen on guitar and vocals, and James Dare on bass. They see a rolling cast of drummers: Ryan Elwood, Zach West, and sometimes the original drummer on their first album, Alejandro Castano. They’re often joined on stage by friends and fellow musicians. On their album you’ll hear backing vocals by Sarah Anderson (of Denver group Paper Bird), and pedal steel guitar courtesy of John Macy, at whose studio their latest album was recorded. At this week’s Cinco de Mayo party at Owsley’s Golden Road, the guys were joined on stage by local free stylist, Heather Taylor, who engaged the crowd with her improv for a good 5 verses or more.

Wonderlic started in 2006 with Allen, James, and Alejandro as a trio. Michael joined on guitar in 2008, and their first album was released in 2010 on Amp Shark Records. Since that first album in 2010, Michael says that the band has started to come into their own as far as writing hit-worthy and radio-friendly songs, and he feels that they don’t have to try as hard as they used to. And as far as sound, the 8+ years of chemistry and tightness is palpable on the album. Recorded in 3 days, mixed and mastered in another 3, all at Macy Sound Studios in Denver, Wunderpus Photogenicus breaks barriers and knows no bounds in terms of style. While the influences of Phish and Frank Zappa are abundant, the album also traces through swing, jazz, bluegrass, rumba, blues, and my personal favorite, the Motown-style R&B track “Like Being Sad”. The lyrical style on the album is fantastic too, full of sarcastic wit and almost limerick-like rhyme schemes, tracks like “Lie to Your Women” show off Galton’s and Whalen’s poetic chops. Wonderlic funded the album through a 30-day Indiegogo campaign, earning $300 over their $2500 goal, with help from over fifty individual donors.

The tight orchestration on the album is no far cry from their live sound– I was honestly astounded at their chemistry on stage, and how clearly they were all consistently on the same page. Further, the fresh spontaneity was definitely there in person. Many came in to see a jam band, but also saw Heather’s improv freestyle, and heard an array of original material and covers as varied as Johnny Cash and the Band, and a medley of Inspector Gadget and “Pure Imagination” from Willy Wonka. Michael had mentioned to me that Miles Davis is a big influence for them, and that jazz and jam bands have in common an element of spontaneous experimentation that really helps to engage the audience, inspiring surprise and curiosity.

As far as being a band in the Boulder/Denver area, Michael admits the only drawback is that because the area is so saturated with talent, often they have to miss out on their friends’ shows, and they also have competition to pull people into their show over everything else that’s going on on a given night. They combat this, he says, by picking one show in a given period to really promote and push.

Once you see them, you’re gonna want to pick up a copy of Wunderpus Photogenicus, available at Albums on the Hill, Twist & Shout, Angelo’s CDs, or online via iTunes and their bandcamp.