How Boulder Manages its Greek Life

CU Boulder is infamous for being a party school, which is partly due to the presence of associated Greek Letter Organizations (GLOs). But there are many beneficial aspects to these organizations which cannot be neglected. Today is Bid day for the sorority houses around CU’s campus so let’s take a look at the relationship between CU, Boulder, and the GLOs.

Any university may accept ties with GLOs if they feel that the school’s mission and objectives are compatible with the professed goals of particular fraternities and sororities. Most Greek Life communities hope to foster community, good grades, and leadership skills. Naturally, CU Boulder has some Greek organizations on its contact list. The university is not legally affiliated with its GLOs, so it cannot take direct actions regarding them. However, CU tries to influence any GLOs affiliated with the Panhellenic Association (Panhel) and Multicultural Greek Council (MGC) in a way that betters their self-governing abilities and leadership development. Through the Office of Greek Life, CU keeps ties to Panhel, MGC, local alumni boards and advisors.

Since 2005, the fraternities previously affiliated with CU have cut ties with the university. There was a conflict of interest which fractured the relationship between the school and the male Greek organizations. The university wanted to delay GLO recruiting until spring semester, to give students time to adjust to college life. The decision came after the death of a student by alcohol poisoning. The death happened due to a fraternity initiation involving alcohol. But the request was too much for the fraternities to accept. By rejecting the request of CU to cease the fall recruiting, the school had to cut their affiliation with fraternities. The previously endorsed fraternities now receive no acknowledgement from CU, and only the sororities still maintain their favor with the university. 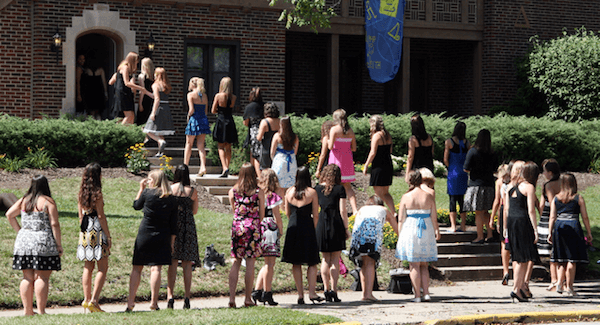 On the plus side, 2005 also saw the creation of the Coalition for a Responsible Community (CRC). The CRC acts as a forum for the university, faculty, staff, greek students, and the greater Boulder community to gather productively. They meet once monthly to discuss issues which concern the relationship of GLOs to the university, police and fire departments, and/or the Boulder community in general.

Creating a dialogue with the community through the CRC is essential to the goals of both the university and the Greek communities. Many GLOs emphasize the creation of social events for members, as well as philanthropic and volunteer events. Greek organizations also offer students the ability to learn leadership skills by taking roles within the self-governing bureaucratic system of a Greek organization itself. Despite what may happen during a student’s time in a fraternity or sorority, their resumes are undoubtedly bettered by the addition of a leadership role they maintained while still in school. It shows dedication to both academics and social ties, which are vital to succeeding in the “real world”.

Joe Inclan
Originally from Lone Tree, CO, Joseph Inclan graduated from Regis Jesuit High School in 2010. He applied to just two universities, DU and CU Boulder, and was accepted by both. Joe chose CU for its beauty, and the appeal of the open-minded and quirky city ensured him how right he was to choose Boulder. With a Bachelor’s degree in both English Creative Writing and Philosophy from CU, he has dabbled in everything from poetry to basic technical articles for 3DPrintingIndustry.com. His hobbies have a range too, from fountain pens and handwriting, to yoyos and skill toys. The most important thing for Joe is to understand things complexly. Boulder and its residents live in an evolving miasma of ideologies and cultures which demand more than a 2-Dimensional perspective. Joe’s fascination with Boulder stems from the fact that it is far more than the sum of its parts, and that is a unique quality. He is glad to be a writer with AboutBoulder.com and looks forward to spreading his knowledge of Boulder with the community.
Tagged: About BoulderaboutboulderABOUTBoulder.combid dayboulderboulder coloradoCollegeColoradocommunityCUGLOGoing Greekgreek lifeMGCPanhelpledgingrushingstudentsuniversity of colorado at boulder