After years of trying to worm their way into Boulder, Wal*Mart finally made it in the form of the “Neighborhood Market”. But why was it so difficult for Boulder to accept the Wal*Mart subsidiary in the first place?

Despite the wealth of Boulder, no city escapes the effects of recessions, nor simple aging. I wrote an article about Pearl Street which explained that the pedestrian mall was created in the 1970s in order to help preserve Boulder‘s aging downtown area. The plan worked, but, it means even the future of Boulder‘s cultural heart has come into question before. This fear inspires wariness of big-box stores too.

If South Park has taught us anything, it’s that Wal*Mart has a magic mirror in the back which controls everything… and, that the store generally puts small, local retailers out of commission. Because of Wal*Mart’s access to inexpensively produced, foreign-made goods, it can offer very low prices and still make a return. Local businesses can’t compete with that.

When a giant retailer like a Wal*Mart Supercenter rolls into town, it outcompetes most other stores with a low price-point. Then, the neighborhood loses the small businesses which helped to define its personality. Events like this have also been known to foster urban-sprawl. People can live and work farther from their nearby cities due to big retailers. They move further out, more single-use developments pop up to consume land, and this cookie-cutter scheme goes on ad infinitum. 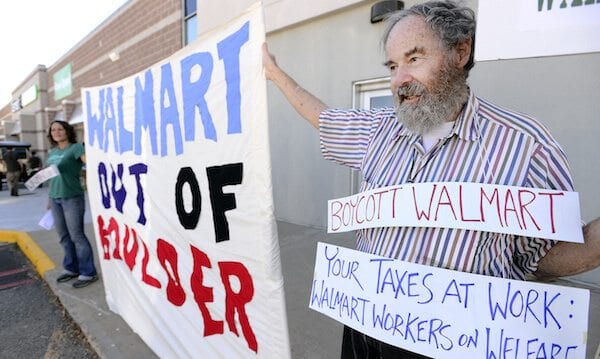 However, Boulder may be uniquely immune to this seemingly inevitable pattern of big-box bullying. The green belt, which surrounds Boulder on all sides, limits the area of the city to roughly 25 square miles. And this is almost entirely developed already. Even if Boulder city council wanted a new shopping center, they would not be able to annex the land to further urban-sprawl. To paraphrase Will Toor (Boulder mayor at the time) from a 2002 BizWest article, any new retail entity coming into town would have to redevelop an existing commercial site within city limits.

Despite the intense picketing by a few dozen Boulderites at the opening of the Wal*Mart Neighborhood Market, it remains in place. For some citizens it is simply more convenient in terms of distance, and more manageable in terms of pricing. Just because the prices are good does not mean Neighborhood Market is threatening the customer base for the locally-owned Alfalfa’s. Home Depot and McGuckin have coexisted for years despite being just minutes from one another. The same goes for Target and Peppercorn.

I personally agree with the outcry against Wal*Mart on an ethical level, given my own experience with them. There were concerns about their environmental effects after they were found guilty on 6 counts of violating the Clean Water Act in 2013. But as a major retailer locked into a preexisting commercial space I don’t see how they could do much harm. Plus, the Neighborhood Market is 1/4 the size of a typical Supercenter.

Let’s not forget that the sales tax on items sold by any retailer in city limits feeds back into the community. Boulder government budget is padded with sale tax revenues. So even when a Target or Macy’s moves into town it helps to ensure the continued functioning of public transport, education, and maintenance of the beautiful Boulder community.

Local Boulder business has come under threat before, and it will again. But as a citizen of Boulder, I understand that my dollar is my vote. If I need a basic shelving unit for my DVD collection, maybe I’ll go to Target. Later, I might need some stationary, and head to Two Hands Paperie to get my craft on. Local businesses which foster community and promote the fun and liberal personality of Boulder can be sustained alongside the generic, convenient discount stores. I think there is a place for both within this quirky community.

Joe Inclan
Originally from Lone Tree, CO, Joseph Inclan graduated from Regis Jesuit High School in 2010. He applied to just two universities, DU and CU Boulder, and was accepted by both. Joe chose CU for its beauty, and the appeal of the open-minded and quirky city ensured him how right he was to choose Boulder. With a Bachelor’s degree in both English Creative Writing and Philosophy from CU, he has dabbled in everything from poetry to basic technical articles for 3DPrintingIndustry.com. His hobbies have a range too, from fountain pens and handwriting, to yoyos and skill toys. The most important thing for Joe is to understand things complexly. Boulder and its residents live in an evolving miasma of ideologies and cultures which demand more than a 2-Dimensional perspective. Joe’s fascination with Boulder stems from the fact that it is far more than the sum of its parts, and that is a unique quality. He is glad to be a writer with AboutBoulder.com and looks forward to spreading his knowledge of Boulder with the community.
See More Articles From Joe Inclan
Tagged: About BoulderaboutboulderABOUTBoulder.comactivismboulderboulder coloradoBoulder CountyColoradocommunityCUhistoryInspirationlocalprotestretailstudentsWalMart