Home › Uncategorized › US 36 Tolls: What to Know

As I’m sure many of you readers have noticed, US 36 has recently added toll lanes onto the highway. This article is to inform you about the new toll lanes, how to use them, and why they exist.

The new express tolls lanes are part of ongoing projects which CDOT has been working on openly for a decade. Only the express lane will be tolled, all the other general-purpose lanes will be refinished and remain free to all users. The express lanes are intended for carpool vehicles, Rapid Transit busses and tolled vehicles. If you intend to use an express lane, the fees and billing are handled by E-470, the same folks who toll eastbound C-470. So if you have the “ExpressToll” sticker already, you are set. If you still need one, you can apply for it here.

The highway expansion is part of a massive project which consulted numerous local governments and has taken many comments from public meetings into consideration. On top of lane refurbishing and expansion the project will also repair aging bridges and create a bikeway. The greatest motivation for this undertaking  comes from the considerable age and size of this heavily traveled thoroughfare. 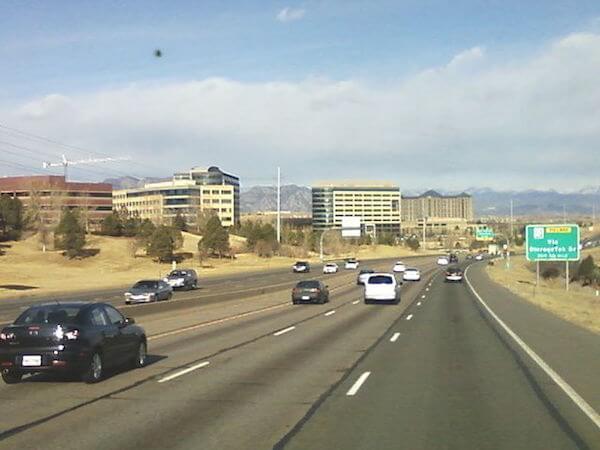 by Xnatedawgx via Wikimedia Commons

When US 36 first opened in 1951 it was a toll road whose funds went toward paying off its construction costs. This infrastructure was taken down in 1968 when the highway was paid for completely. The road was just 4 lanes wide and, at the start, had just one interchange in between Denver and Boulder. A rapidly increasing population created the need for 9 additional interchanges.

December 2009 the Colorado Department of Transportation (CDOT) finished their Environmental Impact Statement, detailing their ideal future improvements to US 36, which they would construct as funding became available for the project. Fortunately, CDOT was able to forge the first public-private partnership with Plenary Roads Denver and High Performance Transportation Enterprise (HPTE) in order to accelerate these much needed improvements.

This agreement, known as a P3, means that Plenary Roads provides 2/3 of the project funds up front. Financing this way has allowed the renovation to take place perhaps 20 years before the state could generate the money on its own. In return, Plenary Roads will split the toll revenues with Colorado government for 50 years. The contract between CDOT and Plenary ensures that the private company adheres to strict maintenance standards set by the state, and that the maximum allowable toll will be $14 each way. That figure is a bit extreme, because expectations are that the total cost one way will typically range from $4-6.

Overall, the partnership between the private and public sectors for this huge maintenance project is a good thing for the state. CDOT retains much of the control over the project, and the financial risk is assumed by Plenary in expectation of their future payout from the completed project. Plus, the bikeway means that the ever increasing cycling community will be able to ride confidently alongside their fellow, motorized citizens.

Joe Inclan
Originally from Lone Tree, CO, Joseph Inclan graduated from Regis Jesuit High School in 2010. He applied to just two universities, DU and CU Boulder, and was accepted by both. Joe chose CU for its beauty, and the appeal of the open-minded and quirky city ensured him how right he was to choose Boulder. With a Bachelor’s degree in both English Creative Writing and Philosophy from CU, he has dabbled in everything from poetry to basic technical articles for 3DPrintingIndustry.com. His hobbies have a range too, from fountain pens and handwriting, to yoyos and skill toys. The most important thing for Joe is to understand things complexly. Boulder and its residents live in an evolving miasma of ideologies and cultures which demand more than a 2-Dimensional perspective. Joe’s fascination with Boulder stems from the fact that it is far more than the sum of its parts, and that is a unique quality. He is glad to be a writer with AboutBoulder.com and looks forward to spreading his knowledge of Boulder with the community.
See More Articles From Joe Inclan
Tagged: About BoulderbikebouldercarpoolCDOTColoradocommunityCUcycleDenverhighwayHOVlocaltollstraveltravelingUS36
Boulder Colorado Air Quality