Home » Blog » History of Boulder » Alfalfa’s – Cornerstone of a Community

Alfalfa’s – Cornerstone of a Community

Boulder’s history is interwoven with the history of the natural food industry. As many of you know, big companies like Rudi Bakery, White Wave Tofu, Horizon dairy, Coleman Beef, Pharmaca, Celestial Seasonings, and more new brands offering whole, delicious and healthy alternatives for Boulder’s picky eaters (myself included) got their start pushing their wares at Alfalfa’s Market.

The story of the making of this international movement has roots in Boulder. As I mentioned in my last article, the health movement came to Boulder around the turn of the 20th century with many folks coming to Boulder to take in the air. In 1896 the Boulder Sanitarium (not the crazy kind) opened. From the brochure: “Boulder’s hygienic surroundings, purity of water supply, desirable climate, proper altitude, and attract natural surroundings.” All still true today and why we want to be here over 100 years later. 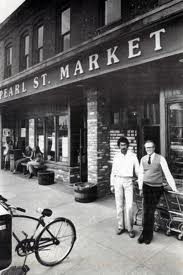 The “Crystalization” of the Boulder health food industry started in the 1970’s when Mark Retzloff, founder of Alfalfa’s, followed his Guru Majaraj Ji Prem Rawat of the Divine Light Mission to Denver (the guru was earlier known only as Maharaj Ji, but today goes by Prem Rawat.) This is where he met Hass Hassan. Mark and Hass created the Pearl Street Market in 1979, the predecessor to Alfalfa’s. In 1983, along with health food chef Lyle Davis, Alfalfa’s opened its first store at the same location it lives today. The stores concept was “ to provide wholesome food – organic whenever possible – to customers with a healthy dose of friendly and knowledgeable customer service.” Soon Alfalfa’s became a community gathering place providing “a variety of events that became more popular than the store itself – parking lot dog washes, pancake breakfasts, food bank drives and events that encouraged Boulderites to rally around important food causes, like dolphin safe tuna.” Pushing the anti – GMO, pesticide, and labeling guidelines forward bringing us the organic and labeling options we enjoy today!

For many of you seasoned Boulderites, you may remember Alfalfa’s only real competition, Crystal Market which was started in 1985 by Jirka Rysavy, founder of Gaiam, and was the predecessor for Wild Oats. 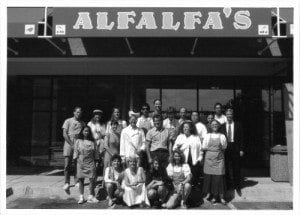 And then the 1990’s happened, and the health food market industry went into a consolidation frenzy. In 1996, Wild Oats bought up most of America’s small health food stores merging with Alfalfa’s. Does anyone still have the Wild Oats how to cook beans and rice pamphlet? I still do!

In 2007, Whole Foods Market merged with Wild Oats Markets, and the store at Broadway and Arapahoe never really made the transition because the Federal Trade Commission challenged the merger and found that Whole Foods Market was monopolizing the industry in many areas of the country and was required to sell 32 stores, the Broadway and Arapahoe location being one of them. So in 2010, the FTC approved the sale of the “Whole Foods Market” store to Alfalfa’s founder Mark Retzloff, Barney Feinblum and Hugo van Seenus bringing the cornerstone of our community back to its home grown roots. And now it has expanded to Louisville (which really needed it!)

For those of you out there who have worked at Alfalfas, or want to… This goes out to you…

1896   Boulder Sanitarium opens. From the brochure: “Boulder’s hygienic surroundings, purity of water supply, desirable climate, proper altitude, and attract natural surroundings” made it an ideal place for a Sanitarium. The facility promoted the idea of living a healthy lifestyle through education and daily practice. It offered a healthy, natural diet of fruits, grains and vegetables: the great outdoors combined with proper exercise; the benefits of hydrotherapy and electrotherapy; and the virtues of mental diversions, such as musicals, lectures and informal talks. The Sanitarium is an early example of the lifestyle that people living in Boulder strived for. These ideas of health for the human body expanded significantly after the 1960’s with more companies providing products to compliment a more natural way of eating.

1969   Mo Siegel and Wyck Hay began harvesting herbs in the mountains outside of Boulder, which they used to make herbal teas that were hand-sewn into muslin bags. Wyck’s brother, John Hay, joined the company in 1971.

1972   Siegel and Hay launched Red Zinger tea, which was the start of Celestial Seasonings.

1977   Jeffrey Cohn opens the first Brewing Market in Boulder, and eventually begins roasting his own beans. This is the predecessor to Allegro Coffee.

1979   Pearl Street Market opened by Mark Retzloff & Hass Hassan. This was the predecessor to the Alfalfa’s chain. Mark and Hass worked together at the Rainbow Grocery, which was eventually acquired by UNFI.

1979   Coleman Ranch in the Southern Colorado town of Saguache became the first company to earn a USDA label for hormone- and stimulant-free beef. Alfalfa’s eventually became one of the first natural foods stores to sell beef, and Coleman supplied it.

1983   Alfalfa’s opened its first store at Broadway & Arapahoe. Became one of the first supermarket format – “Supernaturals” – natural foods stores in the country with 12,000 square feet and all the major grocery store departments.

1983   The School of Natural Cookery opened by Joanne Brett. Eventually became the Culinary School of the Rockies, opened as an extension of educating customers for Quinoa Corporation and Alfalfa’s Markets.

1983   The Herb Research Foundation established by Robert McCaleb in Boulder. HRF has been educating the public, health practitioners, legislators, and the media about the health benefits and safety of herbs, drawing on a specialty botanical library containing more than 300,000 scientific papers on thousands of herbs and multiple online sources of clinical, pharmacological, chemical and horticultural information.

1988   Jirka Rysavy founded Gaiam. Gaiam is a provider of information, goods and services to customers who value the environment, a sustainable economy, healthy lifestyles, alternative healthcare and personal development.

1990   Steve Savage and his father start Eco Products out of their garage.

1998   Whole Foods Market opens its store on Pearl in Boulder. It quickly becomes one of the chain’s top 5 performing stores.

2001   Pharmaca Integrative Pharmacy founded in Boulder by Barry Perzow. Perzow was a long-time natural foods retailer and founder of Capers Community Markets in Vancouver, BC, which was acquired by Alfalfa’s in 1995, and eventually Wild Oats and Whole Foods.

2002   Mike Gilliland opens the first Sunflower Farmers Market store. The chain is based outside of Boulder, Colorado and currently operates 29 stores.

2004   Chocolove moves from co-packer to custom plant in Boulder

2005   Naturally Boulder founded as a partnership between the city and private sector to solidify Boulder as the epicenter of the natural products industry and to support nascent businesses to launch and stay in Boulder, Colorado. We promote natural products and services in Boulder through various events and educational opportunities.

2009   Tom Spier and Brendan Synnott invest in Phil’s Fresh and change the name to evol. burritos.

2010   FTC approves the sale of the Whole Foods store at the corner of Broadway & Arapahoe to Alfalfa’s. Alfalfa’s founders, Mark Retzloff, Barney Feinblum and Hugo van Seenus announce the return of Alfalfa’s to its original location – this closes the final chapter on the Whole Foods/Wild Oats merger.

And for those of you who want to know what this looks like today check out this image: 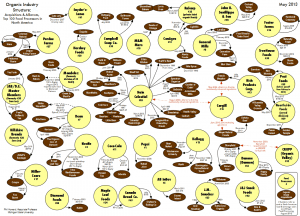