Home › Blog › History of Boulder › What the Heck is a Chautauqua?

What the Heck is a Chautauqua?

Every Boulderite knows that Chautauqua is up on 900 Baseline Road in Boulder, but how did it get there? And what is a Chautauqua anyway?

The Chautauqua movement of the late 19th century was an effort to educate rural communities who lacked access to the mass culture being developed in cities. The movement lasted from the 1870s all the way into the 1920s. Rural peoples were hungry for entrainment and brain food, but lacked a way to easily travel because automobiles weren’t widely available until 1910.

The “Mother Chautauqua” (which sounds a bit like a spaceship name to me) was organized near Chautauqua Lake in New York State in 1874. This Chautauqua, co-founded by Methodist Minister John Heyl Vincent and business man Lewis Miller, spawned many “daughter” Chautauquas, like our very own Colorado Chautauqua. The original gathering allowed Minister Vincent to instruct Sunday School teachers in what amounted to a summer school for instructors. The movement created a wave across the nation. Some daughter Chautauquas took the form of traveling bands of performers armed with tents, and others were established at permanent locations. Only one of the permanent locations lands West of the Mississippi. 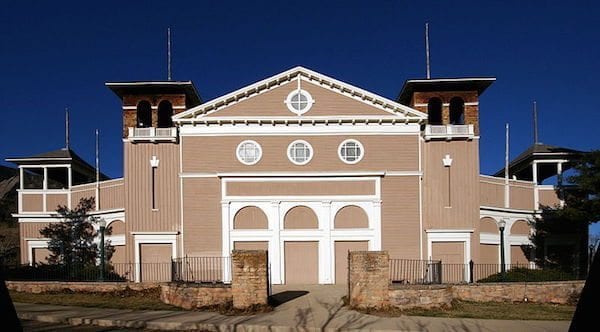 The dry soil and cool air of Boulder was just what the Chautauquans were seeking. The site covers 40 acres of total land, 14 of which hold hiking trails. The dining hall was built in 1898 followed by the Administration building (1900), Missions House (1911), Community House (1918), and Columbine Lodge (1919).

In the earliest years, advancing the cause of prohibition was a major theme of many presentations featured at Colorado Chautauqua. There were also dramatic Shakespeare readings, operatic arias, and presenters on various subjects, including religion. Though, Chautauqua required that religious speakers cater to the non-denominational religious attitude of the organization. Music was the main attraction though. For the first 20 years the Colorado Chautauqua held 40 full-evening musical programs every summer season. Some Chautauqua attendees winterized their cabins to stay at the camp year-round, so it became a partial residential district too.

In 1918, the organization began featuring more movies, to counter the rising cost of hosting live speakers. But the appeal of the Chautauqua faded with the availability of cars, and eventually radio  and television entertainment, to the Western populace. People could easily absorb culture with a drive into the city, or spend the evening at home with their new toys. By the 1970s, the Colorado Chautauqua was mostly showing movies, and their revenues and attendance had been low for years. The site fell into a state of disrepair, and city government was thinking about a demolition plan.

But in 1974, Laurence Paddock wrote an application for the site to be recognized on the National Register of Historic Places. The listing was achieved in 1978 and thoughts turned from demolition to restoration. But the real saving grace was the arrival of the Colorado Music Festival, also in 1978. This festival celebrating classical music was first set in the Auditorium at Colorado Chautauqua and continues to liven the space to this day.

The Colorado Chautauqua is now a local Boulder landmark, indicative of a past more complex than some migrating residents may realize. Today the Colorado Music Festival is one of the biggest events in Boulder, and Chautauqua also serves residents recreation, education, housing, and beautiful hikes into the iconic Flatirons.