Wildest Weather Ever in Boulder County

The incredible warm winds lately got us thinking about how weird Boulder County’s weather can be. So here are a few examples of weather events gone rogue in our county, and some facts about why they occur. 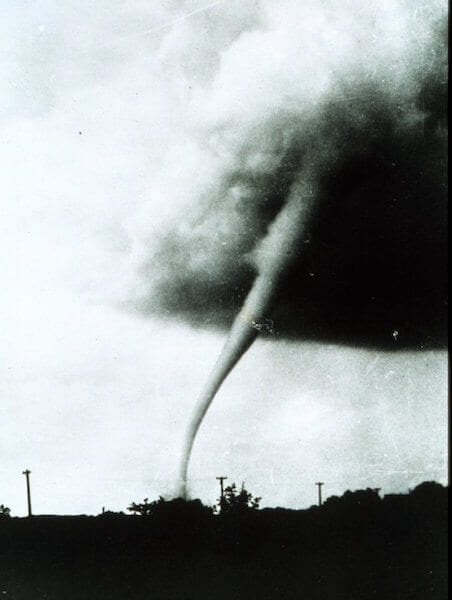 Though they might seem like more of an Eastern Colorado problem, tornadoes do occasionally appear in Boulder County. Unlike their eastern cousins, they are typically much less powerful and only rear their heads every few years. The most recent tornado touchdown in Boulder County was in June, 2015. Several homes in the 15300 block of highway 287 took damage, but no injuries or fatalities occurred. So, Boulder is not the victim of many tornadoes. But, if you see a funnel cloud around here it’s still a good idea to get underground. 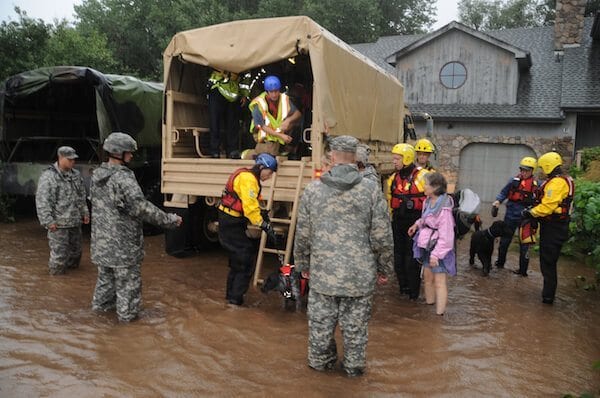 Colorado is prone to flash floods, and being right at the edge of the Front Range makes Boulder County a perfect place to start a liquid catastrophe. In 1894 a flash flood filled Boulder Canyon and quickly overloaded what is now Canyon Blvd (it was literally named “Water Street” back then). The Big Thompson Flood of 1976 saw 12 inches of rain fall in 3 hours. The swiftness of the storm caught people off guard and took 144 lives, and caused $35 Million in property damage. In 2013 Boulder County measured 15 inches of rain over just one week. That storm claimed 8 lives and did a whopping $2 Billion in damages. Though these events are rare, they are deadly serious. Keep anything in a basement raised a few inches off the floor, and just remember: sometimes when it rains, it pours. 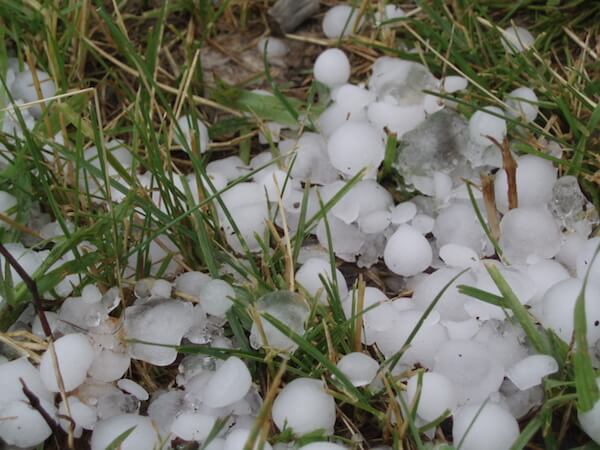 Some pebble-sized hail in the grass. Photo Credit: Raysonho.

The cities of Lyons and Boulder are actually tied for the top spot for largest recorded hailstones in the county. Each city has reported 6.35cm (2.5″) diameter hailstones in the past. If you want a detailed map of hail reports for Boulder County check out this site. Apparently the zip code with the highest incidence of hail is 80004. If that sounds familiar it’s probably a good time to get your car a hail cover.

Boulder actually has some of the highest peak wind speeds of any US city. reports over the years regularly record wind speeds over 60mph, and often reach 70+. There are reports from NCAR exceeding 100mph. These incredible wind speeds create serious damage. They are often caused by a phenomenon called a Chinook (pronounced “shin-uck”). A Chinook is a waft of moist air moving from the west coast to the interior of the continent. The moist air releases precipitation down the near/windward side of the continental divide. Meanwhile, the newly dry air emerging on the far/lee side of the mountains warms as it descends the slope of the mountains. This warm and dry air eats away the snow in Boulder and allows us to bask in warm and dry winter winter. Meanwhile, the other side of the Rockies gets hammered by snow. Sometimes the grass really is greener on the other side. 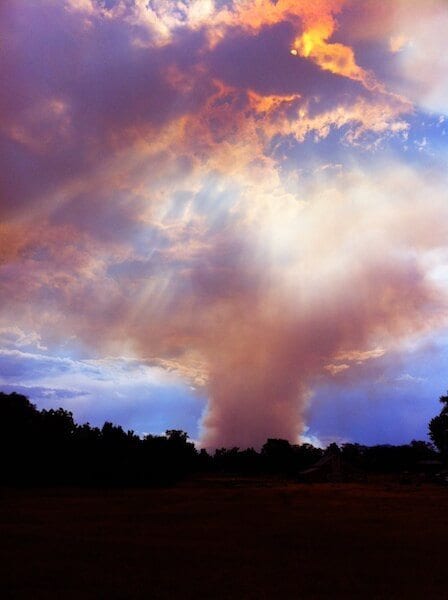 Sometimes they are man-made, and sometimes they are natural, but wildfires are undoubtedly a Boulder County weather phenomenon to be recognized in this list. These fires are so massive they get names. A few noteworthy fires include: Black Tiger Fire (1989), Olde Stage Fire (1990), Overland Fire (2003), and Four Mile Canyon Fire (2010). Combined, these fires have destroyed over 250 homes in the county and put thousands of people in mortal danger. Fire prevention techniques developed in the last century have increased vegetation densities in local forest by 10-100 times their natural states. This, ironically, creates a tinderbox for unbelievably huge fires to fuel themselves. Luckily, Boulder County offers education about fire prevention and safety for homeowners at risk of fire damage. But inevitably the flames will come. When they do, we ought to come together as a community to help our neighbors raise themselves from the ashes.

We thought we would end on a  happier note. Boulder County is free of earthquakes. There was a 2.5 magnitude quake measured in Indian Hills back in September, 1986, but that is actually Jefferson County. So you can toss out the earthquake tether that come with your bookcases. You really won’t need them here.

We hope you learned a thing or two about wild Boulder weather today. Give us a like or comment on Facebook if you enjoyed this. Have a great day.

Joe Inclan
Originally from Lone Tree, CO, Joseph Inclan graduated from Regis Jesuit High School in 2010. He applied to just two universities, DU and CU Boulder, and was accepted by both. Joe chose CU for its beauty, and the appeal of the open-minded and quirky city ensured him how right he was to choose Boulder. With a Bachelor’s degree in both English Creative Writing and Philosophy from CU, he has dabbled in everything from poetry to basic technical articles for 3DPrintingIndustry.com. His hobbies have a range too, from fountain pens and handwriting, to yoyos and skill toys. The most important thing for Joe is to understand things complexly. Boulder and its residents live in an evolving miasma of ideologies and cultures which demand more than a 2-Dimensional perspective. Joe’s fascination with Boulder stems from the fact that it is far more than the sum of its parts, and that is a unique quality. He is glad to be a writer with AboutBoulder.com and looks forward to spreading his knowledge of Boulder with the community.
See More Articles From Joe Inclan
Tagged: About BoulderaboutboulderABOUTBoulder.comboulderboulder coloradoBoulder Countychinookchinook windColoradocommunityearthquakefirefloodhailhistorylocaloutdoorsraintornadoweatherwildfire
Boulder Colorado Air Quality